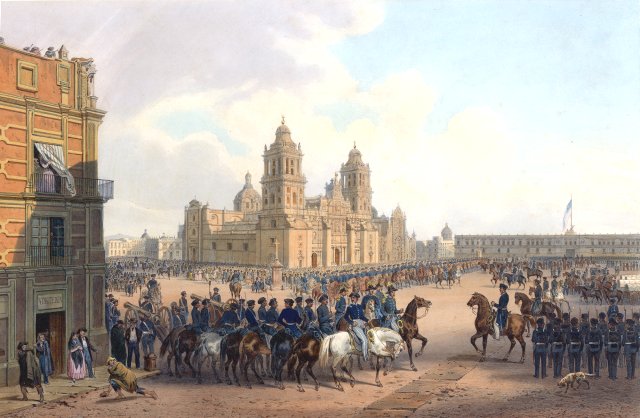 War and the Art of Governance: Consolidating Combat Success into Political Victory 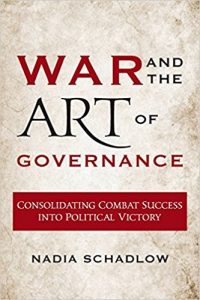 Nadia Schadlow’s War and the Art of Governance: Consolidating Combat Success into Political Victory is an excellent analysis of key U.S. military engagements throughout its history. The principal lesson learned from such engagements, according to her, is that transforming combat gains into desired political outcomes is a fundamental task in all forms of warfare and is necessary to achieve lasting victory. “Success in war ultimately depends on the consolidation of political order, which requires control over territory and the hard work of building local government institutions,” she claims. Given recent proposals to increase U.S. combat presence in Afghanistan and Syria, and debates over the timing of the Obama administration’s decision to withdraw U.S. forces from Iraq in 2011, this book is highly recommended reading for U.S. policymakers considering the authorization of force.

Based on a review of numerous case studies dating back to the Mexican-American War of the 1840s through the recent conflicts in Afghanistan and Iraq, Schadlow illustrates how “politics continues to shape the character of war.” In its military history—from fighting conventional wars to conducting irregular warfare (IW) and counterinsurgency (COIN) campaigns—the U.S. has been faced with the challenge of transforming tactical combat successes into political stability, she contends. Additionally, as she describes, the U.S. Army has been the main catalyst of all governance operations (i.e., tasks associated with reestablishing political order) despite reticence of civilian and military leaders, and the challenge of simultaneously managing governance and combat operations. When done well, as in Germany, Italy, and Japan after World War Two (WW2), she avers that the results can be sustainable. However, when done poorly, as in Afghanistan and Iraq, conflicts can be protracted with increasing loss of life. While a lot has been written over the past 15+ years on U.S. fighting in Afghanistan and Iraq and the subsequent instability that ensued, Schadlow’s historical review reveals that these interventions are not unique. Rather, they represent the latest examples of a history of U.S. military conflicts in which the need to address the political dimensions of war is essential, otherwise the likelihood of chaos and elongated conflicts increases.

Furthermore, she declares that U.S. civilian and military leaders have historically been reluctant to incorporate broader political and strategic objectives into military planning. Why? Per Schadlow, the reasons for such reluctance include U.S. democratic traditions in which civilians, rather than the military, oversee political tasks; U.S. anti-colonial sentiments (e.g., against “nation-building” or “occupation”); a long-held U.S. perspective that the military should focus on tactical rather than political objectives; and a growing tendency to rely more heavily upon military technology (e.g., unmanned aerial vehicles—UAVs) rather than boots on the ground, as a measure to reduce potential loss of life, but at the expense of potentially achieving lasting strategic objectives.

Schadlow acknowledges that the military has recently improved its thinking with regard to the political nature of warfare by updating key doctrine (e.g., the 2006 U.S. Army-U.S. Marine Corps COIN manual—which recognized the importance of addressing political, social, and economic factors in an active combat zone) based on the experiences of Iraq and Afghanistan. Despite this development, more needs to be done she argues. She also rails against traditional military thought which had relegated the thinking of the political dimensions of war and overseeing governance operations to IW and COIN campaigns. As she illustrates, after such campaigns in the 1950s and 1960s, the U.S. military began to consider the importance of governance operations even though they remained outside the purview of conventional warfare doctrine and operations. As mentioned, Schadlow believes that, echoing Clausewitz’s concept that (all) war is an extension of politics by other means, the political dimensions of warfare and their implications for victory are critical to understand and prepare for in all types of conflict—not only IW and COIN, but conventional war as well. Moreover, in addition to the new thinking about the political aspects of warfare, the U.S. military had previously been developing a cadre of civil affairs officers—adept at managing governance operations—allocated to the U.S. Special Operations Command (USSOCOM) and within the U.S. Army Reserves. However, as Schadlow points out, housing such personnel within a “special” command or reserve component demonstrates the U.S. military’s incorrect stance that governance operations are distinct from conventional war-fighting.

In order to overcome the potential dangers of failing to properly address the political factors that can shape the outcome of a conflict, Schadlow offers several recommendations for policymakers: 1) politics must be understood as a critical component of all types of conflict—conventional and non-conventional—and thus, governance operations should not be distinct from combat operations; 2) “unity of command” is essential to both tactical and strategic success in war; 3) the Army must maintain control over governance operations during wartime; 4) kinetic operations alone are insufficient to achieve sustained victory in combat operations and instead, a renewed focus on achieving the desired political end state is required; 5) military technology is a means rather than an end; and 6) the capacity of institutions whose mandate is to lead governance operations must be further built and their personnel must be better equipped with the necessary skill-sets to undertake tasks associated with governance operations (e.g., overseeing elections, drafting constitutions, reforming legal and judicial systems, improving delivery of basic services, etc.) that are likely necessary to reestablish political order during or after the cessation of hostilities.

In conclusion, Schadlow’s investigation of historical U.S. military engagements offers a fresh perspective on the importance of governance and other non-kinetic operations that are fundamental to achieve the desired political outcome of a war. Without factoring the political dimensions of conflict into the equation, policymakers run the risk of failing to achieve their strategic objectives. In this regard, Schadlow offers a controversial suggestion that the U.S. military, based on its past experience described in her case studies, should remain the lead U.S. Government (USG) institution supervising governance operations during wartime. In Schadlow’s estimation, as evidenced by the Afghanistan and Iraq cases, civilian agencies do not have the capability—given the high costs to deploy a civilian to a battlefield as well as the significantly small numbers in staff of civilian agencies—to match the U.S. military. While it’s true that the U.S. State Department, U.S. Agency for International Development (USAID), and other civilian USG agencies do not possess a similar level of staffing or financial resources as that of the U.S. military, given their experience, expertise, and mandate to carry out such tasks, U.S. leaders should give serious thought to at least maintaining current resource levels, if not allocating greater resources, to such civilian agencies even if it means diverting funds earmarked to the U.S. military for undertaking such tasks. Additionally, strengthening the capacity of civilian agencies to undertake these types of missions follows U.S. political culture and traditions with regard to the proper role of the military in political matters. Lastly, based on the historical evidence in Schadlow’s case studies and her claim that the U.S. still lacks the capability to effectively consolidate the political order during or after combat operations, leaders currently contemplating to commit U.S. forces should give serious pause before doing so.