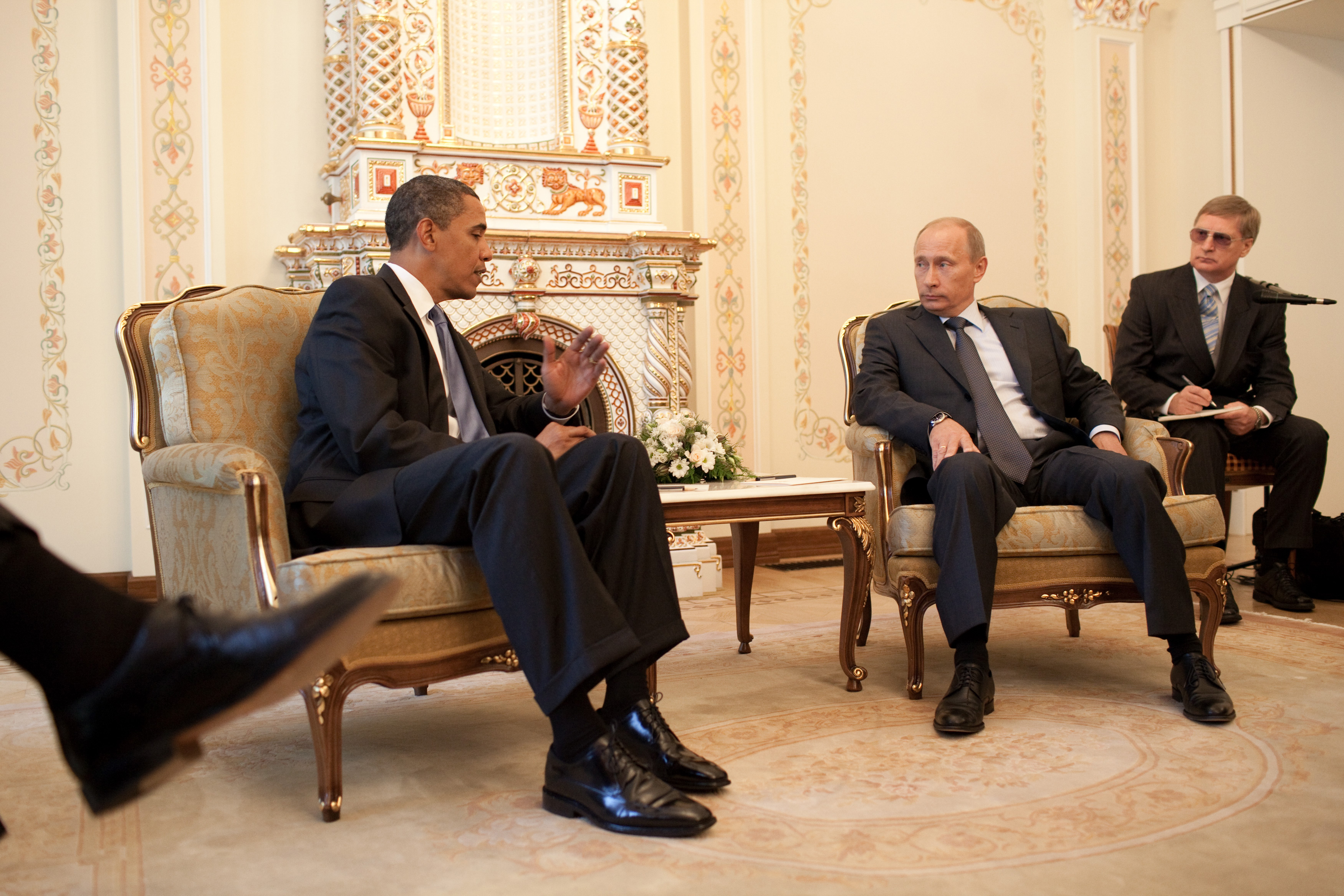 Russian President Vladimir Putin has been setting in motion a number of instruments in the past several years to realign Russia’s position on the international stage as a major security actor. Putin’s swift military deployment to and buildup in Syria is not the only move to signal the leader’s intentions, but it’s his boldest move that takes Russia outside of Europe and directly into a conflict that could soon be added to the growing list of “frozen conflicts” in and around Europe.

If Moscow seeks to become a global security actor and projects its power in and beyond Europe and into the Middle East, then we need to ask: What does Moscow seek to secure, and at whom or what is it projecting its power and to what end? Even the immense firepower of the combat forces deployed to Syria is overshadowed by the limitations Putin might be aware of but refuses to acknowledge publicly, namely Russia’s slowing, sinking, and unbalanced economy, dismal infrastructure, the hyper expensive Russia military in need of serious modernization, and Russia’s short list of (unreliable) allies.

Long-term stability (for Russia) is a good price to pay for short-term gain, or so this appears to be Putin’s logic. When Putin moved into Syria he put his concentration of power in the Black Sea Region to use. This move was based, no doubt, on a calculus for opportunity.

A problem with this assessment is that it is connected almost exclusively to tactical gain, not strategic benefit. Looking back to Europe, Putin is making a lame attempt to defy the US and its partners and continue to extend his record of defiance. He has mocked the West by breaking an arms embargo on Iran, which resulted in the sale of several hundred missiles. Putin also sided with Iran in demanding that the embargo on conventional weapons and ballistic missiles be scrapped.

To his growing list of “frozen conflicts” and military interventions in Europe (i.e., Trans-Dniester, Nagorno-Karabakh, Georgia, Crimea, Donestk and Luhansk, and particularly the Baltic States), also violated the Minsk agreements, breached EU and NATO member states’ air spaces on multiple occasions, including the US and Canadian Air Defense Identification Zone in the Arctic. Nearly 40 incidents of military encounters (some high risk and others classified as serious incidents with the risk of escalation) have been identified since March 2014.

Stepping to the beat of an anti-ISIS and anti-terrorism tune, the EU might be duped into thinking that Russia is sort of a force for good in Syria, which could result in the easing of sanctions against it. We already know Russia’s not really there to inflict serious damage on ISIS. After all, Assad’s existence could barely be justified without the looming presence of the jihadi extremist group in the heart of Syria. With it, Putin’s Sunni state coalition is just more smoke and mirrors to conceal more self-absorbed ambitions.

If we take these events into account and try to visualize them as Russia’s attempt at becoming a global security player, it is difficult to formulate the view of long-term and sustainable power in and outside of Europe. Putin’s first major military operation beyond Europe is to buttress the declining power of the Assad regime for as long as possible. It might even lead to Russia reaching for and establishing military bases in parts of the eastern Mediterranean (i.e., Cyprus, Greece, or other parts of the Balkans).

Russia’s GDP is only equivalent to Italy’s; still Russia has one of the largest and most expensive infrastructures in the world – now requiring the equivalent of trillions of US dollars to improve. In World Economic Forum’s Global Competitiveness Index (2012-13), Russia ranked 101 of 144 countries in terms of its infrastructure quality. Balancing between military modernization and buildup, and the country’s much-needed infrastructure transformation will be a daunting task for Moscow. Multi-laterals like the European Bank for Reconstruction and Development put up some of the funds required. NATO economies tower over Russia’s, which is just a small fraction.

Force modernization is just one tendril of military competition between Russia and the West. However, during the Cold War, the West went beyond economic dynamics to showboat its full military potential with an arms race. President Barack Obama could take this approach with Vladimir Putin, who probably already recognizes that it would present Russia with an economic, technological, and military pace impossible to maintain. When Putin spoke of reshaping the Russian military into a modern and effective force, he knew that it would require a hefty sum of funds. Initially, the Kremlin intended to invest about 20 trillion rubles into a program that was to last about 10 years. Let’s not forget that by the end of 2015 Putin is expected to have paid back more than USD 150 billion in loans.

Putin praised his own plan, saying it was not only feasible but would undoubtedly be fulfilled. Putin stated that “Our goal is to make sure that by that time, by 2020, the amount of new weapons and military technologies in our armed forces reached no less than 70 percent.” Yet, the long-term goal is still give year from now, and there are no guarantees that Putin’s big objective will be met. Despite the patchwork of dilapidation across Russian military branches, Putin presses on. They sort of resemble a rolling artillery strategy with each projected success building on the other.

Impact of Sanctions on Putin’s Power

Russia has been demonstrating a decade of failure in its military buildup (few successes here and there). Claims of modernization are falling far short of reality and its 2015 objectives of re-equipping the armed forces with weapons necessary to be a profound military player on the global stage have been interdicted by the effects of sanctions that were brought on as a result of Russia’s aggression in Ukraine. Russia’s domestic industries are in decline – news that Putin received by Russia’s Deputy Defense Minister Yuri Borisov directly.

Improvement in this area could go one of two ways. Postured against weak regional opponents, build-up/modernization may be threatening. Or postured against a US and EU strategy that relies too much on soft power or that breeds popular protests and social movement like the colored revolutions, modernization may have both an asymmetrical advantage and hard capabilities advantage.

When France stepped back from a deal it made with Russia a while back, Moscow was stunned while sanctions against the country mounted. Those sanctions were supplemented by a ban on Russian defense industry enterprises (Uralvagonzavod, Oboronprom, and United Aircraft Corporation) borrowing capabilities. Russia’s poor internal growth and dependence on foreign (i.e., Western trade) is a major Achilles’ heel in Russia’ force modernization and buildup. The picture of how Moscow can solve the problems of its failed military and technology cooperation with the West is largely incomplete. To capitalize on Russia’ lackluster position, efforts should be made to contain Russian within its own declining energy niche by disrupting arms and technology trades between Moscow and Beijing.

Russia’s Military and Industrial Commission Board Deputy Head Oleg Bochkaryov explained that while the industry is declining, growth can be observed in the defense sector. Even if the growth is spot on, Russia’s saber rattling is a pricey practice and Moscow’s aims to move beyond Europe require further spending that would allow it to rely on hard powers. The West is well aware that Putin, when backed into a corner, can be treacherous and unpredictable, but the West’s sanctions already running their course could proliferate desperation within the Kremlin. Instability in this way is something that the West needs to be cognizant of.

Putin’s deployment of vast military materials and personnel is rife with desperation; leaders of states in strong positions do not typically witness military moves of this nature. But Putin is slowly wrapping himself around the Black Sea Region and is doing a fine job at establishing considerable strategic influence there. If enough of Putin’s tactical achievements can be weaved together, he may be able demonstrate an upgraded position of power in parts of Europe even in spite of other drawbacks. During the height of EU expansion and as NATO crept closer to Russia’s border, Moscow was feeling the heat of encirclement. However, Moscow has found a way to do some encircling of its own, with now Turkey feeling the squeeze.

By looking to the weaker states, Russia can augment its power. Obama has been chided for focusing too much on one point – a habit that Putin hasn’t fallen into. Similar to an arms race, by overloading a country engaged in something it cannot handle, Putin is ready to commit to many fronts in an effort to overload the capacity of the West. Ready to initiate military maneuvers in other areas like Central Asia. The West needs to better anticipate Russia’ willingness to move into adjacent regions such as the ex-Soviet states in an effort to build its own “buffer zone.

It is easy to see Russia’s invasion and annexation of Crimea as surprising events for the West. A long-standing ally of Bassar al-Assad, Russia should have, however, been expected to eventually lend military support to the Syrian leader. How the West could have been caught off guard is a bit mystifying. What this string of events over the past several years says about Putin’s intentions is quite clear. Rather than seeking to be a security actor on the global stage, Putin is using what hard power he has for tactical gain, often at the expense of strategic advantage. The West needs to be cautious that Russia’ is not invited in by its vulnerable neighbors, giving the impression of peaceful Russian enlargement. Putin has given considerable attention to upgrading and augmenting the hard power capabilities of his country, but even with the full weight of a healthy Russia behind him his initiatives just outside of Europe hardly catapult Russia onto the global stage as a security actor.