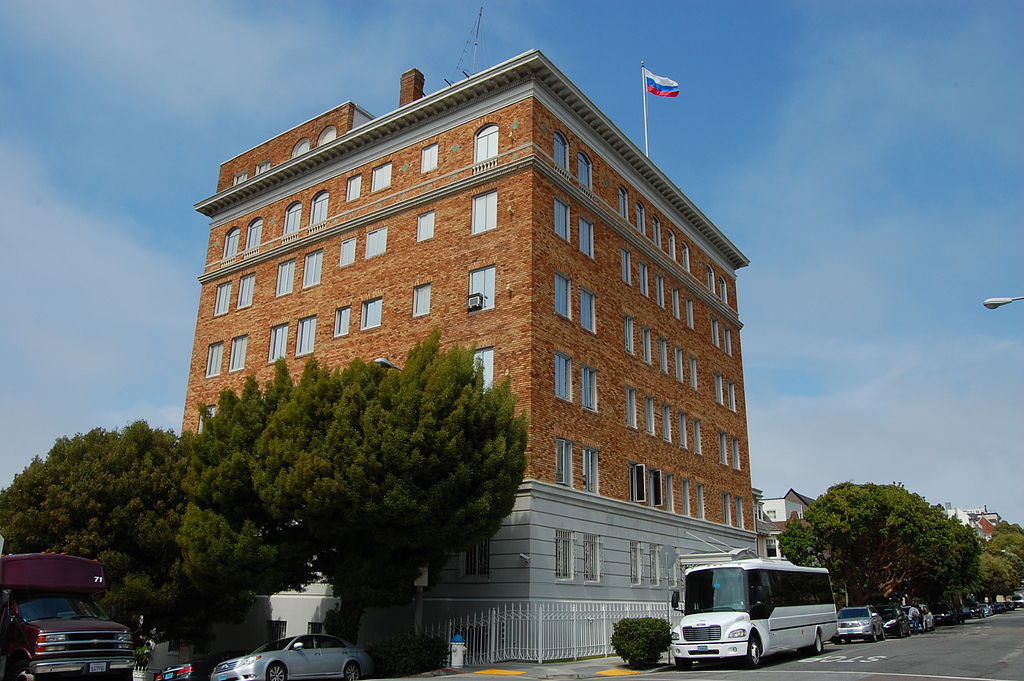 Last week, the United States announced the closure of the Consulate General of Russia in San Francisco, as well as two Russian trade missions – in Washington and New York. The US State Department stated that the decision was made “on the principles of parity” in response to the limitation on the number of employees of the American diplomatic mission in Russia.

Commenting on this decision, State Department spokeswoman Heather Nauert noted that the US authorities are not going to expel Russian diplomats from the US. In addition, Russia will retain the occupied buildings, but will not be able to use them for diplomatic missions. Nevertheless, the reaction of the Russian side was rather harsh.

Thus, the official representative of the Russian Foreign Ministry, Maria Zakharova, in her September 1 commentary called the decision of the US authorities “unprecedented measures to restrict the activities of the Russian diplomatic and consular missions in the United States.” The Russian consulate in San Francisco, in a statement published on the official website of the agency in social networks, also called the decision of the US authorities “an unfriendly step.”

Meanwhile, American experts differ in their reactions to the closures.

“It is an important and necessary response. The two countries have had an uneven number of consulates since   the dissolution of the Soviet Union in 1991 when our mission in Kiev was turned into a U.S. embassy. Thursday’s announcement corrected the imbalance. Closing Russia’s San Francisco consulate now leaves the U.S. and Russia with three consulates in each other’s countries on the basis of parity. Nevertheless, there is a risk that Putin will order the closure of our Consulate General in St. Petersburg, since that and the Russian mission in San Francisco have been linked since 1972 due to reciprocity under the U.S.-USSR Consular Agreement. Therefore, Washington’s action may actually lead to a further downward spiral in retaliation.”

“Russian espionage will never diminish to such an extent that it ceases to be a threat to us. Their tactics and operators can change, but their strategic goals will always remain the same as during the Cold War, which means that we must remain vigilant,” says Andrew Bringuel, the retired Supervisory Special Agent with 27 years of experience in the FBI.

At the same time, the former FBI official warns: for the United States itself, the response in the “diplomatic school of the Cold War” mentality can be fraught with dangerous diplomatic consequences.

“If the situation gets out of hand, it can easily grow into a negative spiral. The United States places economic sanctions, Russia answers by kicking out American diplomats, America responds by closing the Consulate and a couple annexes, but at the same time emphasizes its hope for the end of the conflict. Clearly the US doesn’t want further escalation, but you understand that Russia will have to answer somehow. Perhaps flying bombers in support of North Korea will be their response,” – fears Bringuel.

A former senior CIA official with nearly 30 years of experience in intelligence, John Sipher, takes a different view. In his opinion, Washington’s response is disproportionately weak in comparison with Moscow’s actions, and cannot compensate for the damage that is being done to the US intelligence.

“I think that this is not a serious answer, and the president’s previous comments and his obsequious manner towards Putin worry me even more. is even more troubling.  Shameful in fact.  Those people who work in our Embassy in Moscow are out best. They spend years of preparation and language training, they take their families to a difficult environment where they likely be harassed.  To be treated poorly by the Russian government is something they expect.  They do not deserve it from their own President,” – he said.

Regarding the expulsion of American diplomats from Russia, John Sipher is certain of this: Washington traditionally loses to Moscow in this area.

“The Russians are stronger than us in this, and they are much more ruthless. In the past when we have caught Russian spies or sought to expel spies, the Russians always retaliate right away. They are obsessed about being seen as equals. The problem is that they have four or five times as intelligence officers in the US as we have in Moscow.  When both sides toss out the same amount, we are left with far less capability in Russia than they have in the US.  On top of that the FSB is much more oppressive and obnoxious to our diplomats in Moscow than the FBI is here,” – he adds.

The CIA veteran stresses: the main purpose of the sanctions imposed by Washington and the expulsion of Russian diplomats that took place at the end of December is to punish Russia. However, when adopting a “parity” approach, it is impossible to achieve this goal.

“The bottom line is that the Russians attacked us in an unprovoked and blatant manner.  They are trying to harm us and weaken us and our allies around the world.  Their activities in Ukraine, Syria, Afghanistan and elsewhere are outside of international norms.  Therefore, to allow them to insist on parity and come out ahead in the expulsion of diplomats is unacceptable.  We cannot forget that they created these problems and they are the ones who should suffer the consequences, not us.  They treat us as an enemy and we treat them as friends and equals? It doesn’t make sense” – says Sipher with outrage.

“Russia attacked us.  We were trying to send a message and punish them, but ended up with far fewer people. We expelled 35 spies, and Russia, in turn, expelled 755. We closed a couple of buildings, but allowed their employees to stay in the country, and then accepted Russia’s claim of “parity.” For us, this is a serious defeat,” the former CIA agent believes.

Also, John Sipher points out that closing the consulate in San Francisco specifically makes sense only if the Russians really leave the building.

“If they stay there, and the FBI cannot enter, for us it will be another loss for us. As it looks like now, the Russians can stay in the building.  That way, they can continue to use the technical spying gear on the roof and manage spy operations from inside.  The only thing they do is close the door to visa applications.  Again, we lose,” – he concluded.

Recall that on July 28th Russia demanded that by September 1st the United States reduce the number of employees of its diplomatic missions in Russian territory by more than two times – to 455 people, sending 755 diplomats out of the country. In addition, the Americans were forbidden to use the embassy dacha in Serebryany Bor and the warehouse on Dorognaya Street.

In response to a law providing for new sanctions against Russia and signed by President Trump on August 2, new requirements were imposed on American diplomats. Earlier, on December 29, 2016, outgoing US President Barack Obama signed a decree on the introduction of new anti-Russian sanctions in connection with “Moscow’s interference in US elections and pressure on American diplomats” working in Russia. On the same day, the US State Department declared 35 Russian diplomats personas non grata, accusing them of acting “not in accordance with their diplomatic or consular status.” In addition, two Russian diplomatic residences were closed in Maryland and New York.