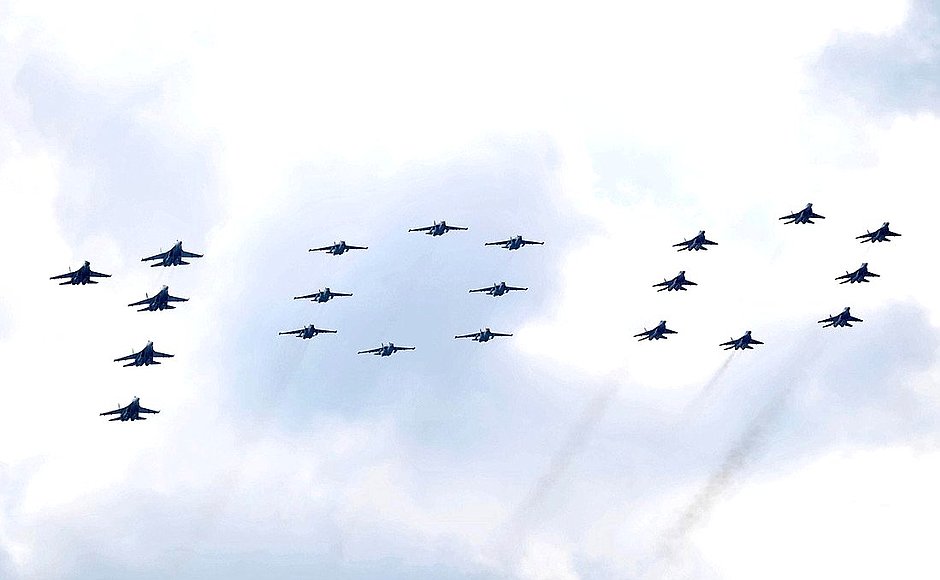 Russian air and aerospace defence forces in the Western MD/JSC are well-equipped and at high readiness.[1]  As a result of Russian military reforms, all air and air defence forces within the MD/JSC are under the operational control of the 1st Air Force & Air Defence Command.  A detailed Air Order of Battle will be published later in 2016.

Fighter-interceptors include the MiG-29SMT ‘Fulcrum’ the SU-27 ‘Flanker’ (incl ‘UB’ training variants) and the venerable MiG-31 ‘Foxhound’ – still the world’s fastest interceptor.  These 200 fighters are subordinate to three regiments.

For fighter ground attack (FGA), there is one regiment of MiG-31BM ‘Foxhound’ and another of SU-24M/M2 ‘Fencer’ fighter-bombers (with some dual-purpose (FGA/ISR) SU-24MR’s).  Finally, there is a regiment of (24) modern SU-34 ‘Fullback’ fighter-bombers, which recently made their debut in Syria, a total of over one-hundred fighters.

This MD/JSC also has fairly substantial rotary-wing (helicopter) assets at its disposal.  Dedicated attack helicopters include the Mi-28N (Night Hunter) ‘Havoc B’, Ka-52A (Alligator) ‘Hokum B’, and both Mi-24 and Mi-35 ‘Hind’s, totaling about 75 aircraft. These are organized into four ‘army aviation’ brigades.[2] For transport, there are three squadrons with over 50 Mi-8 Hip medium helicopters.

For electronic warfare (EW) and intelligence, surveillance and reconnaissance (ISR), there is one dedicated EW (rotary-wing) squadron with Mi-8 PPA (Hip K), together with the new Mi-8 MTPR-1 which carries the ultra-potent Rychag-AV airborne jammer.[3]  In addition, there is one flight of AN-30 ‘Clank’ aircraft, plus ten MiG-25RB ‘Foxbat’ and a dedicated unit of twenty-four SU-24MR ‘Fencer’.

Russia’s military periodically trains with units/formations from Belarus, especially regarding air and air defence forces.  In fact, Russia presently leases Baranovichi Airbase (53°05’40” N / 026°02’50” E) as a ground-based radar station[5], plus a staging base for its own SU-27SM3 fighter-interceptors.  The size of this contingent is claimed to be a ‘flight’ (5), while other sources identify it as a ‘wing’ (regiment). Regardless, this is the facility which Russia publicly announced will house a larger contingent of its own SU-27 Flankers in 2016.  Lida Airbase (53°52’30” N 025°22’40” E) was thought to be the candidate for this new Russian air force/air defence unit in 2013.  In 2014, Russia donated four batteries (16 TEL’s) of the road-mobile SA-20 Gargoyle/S-300PM advanced air defence system to Belarus.  At present, it appears that each of these batteries (along with associated radars and transloaders) has been parceled out to four different airbase locations.[6]  Having such Forward Operating Bases (FOB’s) is ideal for Russia.

This is part two of a four part series of the Russian readiness on its western front.

[1]  These do not include those aircraft affiliated with the Baltic and Northern fleets (both under command of the Western MD/JSC) which will be covered in ‘Part IV: Russian Navy and Coastal Defence Forces’ of the “Facing West” series.

[3] When production of the MTPR-1’s is completed by mid-October 2016, eighteen (18) will have been deployed.  As the first four of these were deployed to the Western MD/JSC, it speaks of the importance that the General Staff attach to this operational command-area (ie. The ‘front line’ with NATO and Ukraine).  These airborne EW assets will be identified and explored more fully in Part III of this series

[4]  The SA-20 ‘Gargoyle’ (S-300PM), sometimes referred to as the SA-10B, is a follow-on to the SA-10 ‘Grumble’ (S-300PS).  Presently it is sometimes deployed in mixed formations with earlier SA-10’s.  It is unclear whether this trend will continue, or is just part of an upgrade towards full/pure SA-20 formations.

[6]  Belarus is currently under EU and US sanctions and an arms embargo is in place. Nonetheless, there are plans to upgrade its own (non-operational) SU-27’s.  See: “Belarus to modernize its fleet of Sukhoi Su-27 Jet Fighter” (Jan 2014) – http://www.airrecognition.com/index.php/archive-world-worldwide-news-air-force-aviation-aerospace-air-military-defence-industry/2014-global-news-worldwide-world-international-air-force-aviation/january-2014-global-news-worldwide-world-international-air-force-aviation-aerospace-air-defence-/993-belarus-to-modernize-its-fleet-of-sukhoi-su-27-jet-fighter.html