First In! A Case for The Formation of a Canadian ‘Rapid Reaction Force’ 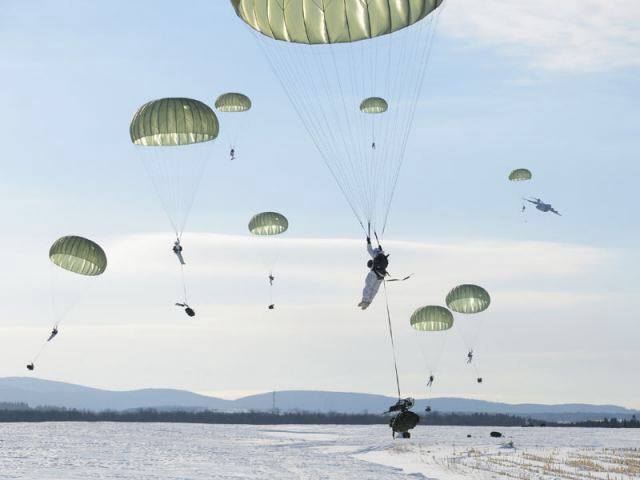 As events in eastern Europe continue to devolve, coupled with possible UN commitments to Central Africa, not to mention the possibility of future incursions into our Arctic archipelago, it might be time to reflect on why we don’t have some form of conventional “Rapid Reaction Force” (RRF). To be sure, the fastest way to transport such a force to any theatre of operations would be by air.  And, ideally, there would be an unobstructed airfield near the intended destination to receive such a force.  But what if there wasn’t??  How do you get in then?  The simple answer is by parachute.  And what if the nature of the adversary force on the ground in that theatre makes it necessary to conduct a ‘forced entry’ operation, such as to secure/rescue Canadian non-combatants?  To be sure, elite troops from our JTF-2 and the Canadian Special Operations Regiment (CSOR) could be called on for smaller-scale operations.  But what if there were more than one ‘situation’ to attend to, continents apart?   Hard as it is to contemplate, in today’s world it wouldn’t be deemed totally unrealistic…  It might be wise to prepare for such eventualities.

Presently, Canada has three (3) ‘jump’ (parachute-trained) rifle companies, each in the third battalion of all three regular infantry regiments: the PPCLI, RCR and R22eR.  Their base-locations are widely separated; Edmonton, Petawawa and Valcartier.  For any medium-to-large scale operation, they would need to be coalesced together with other ‘enablers’ such as artillery, engineers, military police etc..  Ideally, they will have trained/exercised together in order to gel into a cohesive force.  Unfortunately, at the present time, such is not the case.  The last time we had such a force was with the Canadian Airborne Regiment (CAR).  Its disbandment in 1995 in the aftermath of the Somalia affair was a tragedy to most concerned; there may not be sufficient will to see the unit re-established.  Interestingly, Canada’s airborne lineage dates back to WWII, with the activation of the first (then, second) Canadian Parachute Battalion(s) in 1942.

Should there be the political/military interest in reactivating the “1st Canadian Parachute Battalion” (aka ‘1 Can Para’) – all three (3) designated ‘jump companies’ could be repositioned to one geographic location, and folded into this venerable new unit.  Necessarily, the unit would be trained for both parachute and air assault (helicopter) operations, and would total about 650 personnel (all ranks).  For national (sovereignty) operations, the existing number of CC-130 and CC-177 air transports should suffice. However, due to limitations in our strategic airlift (C-17/CC-177, plus US C-5’s) for certain ‘joint’ operations this battalion could conceivably come under operational command of the 82nd Airborne Division, effectively becoming the ninth (9th) (vacant) parachute battalion of the division.[1] Such was the case when the Canadian Army troops from 3 PPCLI (though not fully para-trained) first deployed to Afghanistan, coming under command of the ‘Rakkasan’ Brigade of the US 101st Air Assault Division.

Organizationally speaking, the Canadian Army likely has a number of ways it might consider; however, for the present, let’s simply consider a modernized version of it’s WWII Table of Organization and Equipment (TO&E), with a Headquarters (and Signals) Company, three ‘jump’ (parachute) companies, plus a Fire Support Company with mortar platoon, anti-armour platoon, sniper platoon, air defence platoon etc..  Such an organization is not dissimilar to our counterparts in the UK or US.  But again, the final say on how the new unit’s organization should be laid out needs to be left to our experts.

Most importantly, is the discussion concerning its operational mission(s).  Obviously, priority should be given to the Defence of Canada, particularly its remote/northern areas.  And, since we depend on NATO as part of a collective defence, its second priority should be supporting its operations abroad.  Thirdly, would be the support given to the United Nations (UN).  Within this, any number of operational sub-types could be considered: Non-Combatant Evacuation (NEO) of Canadian citizens abroad[2]; Arctic Sovereignty Protection; Joint Airborne/Air Assault with our US or UK[3] allies, etc.. A host of scenarios could be envisioned, but only some would be chosen where success of the new unit would be deemed most likely. Naturally, 1 Can Para could use its ‘rapid response’ role/capability in one (1) of these domains.   But that is all.  To seriously consider taking on more than one of the above roles at a time would require the expansion of the Rapid Response Force from a battalion-size unit to that of a (likely) brigade (ie. three ‘jump’ battalions, with assorted support elements).  This doesn’t strain far from the realm of possibilities.  But it may require a domestic/international disaster to provide the catalyst.

The reactivation of 1st Canadian Parachute Battalion (1 Can Para) would provide our nation with an extra, cost-effective[4] capability to our existing military options.  Let us hope that our leaders see the wisdom of having such a ready-force at its call.  First In!

[1] Being integrated into the 82nd Airborne Division would not be difficult, as the ‘jump companies’ from all three Canadian Army regiments (PPCLI, RCR & R22eR) periodically jump/train with this formation. Failing this, the Canadian Airborne Battalion (‘1 Can Para’) could be placed under command of Britain’s own 16 Air Assault Bde, which itself lacks a third parachute battalion (beyond the current 2 & 3 Para Bn’s).  1 Para is currently under operational command of the UK Special Forces Support Group (SFSG).

[2] Undoubtedly this would contain a SF/SOF component from JTF-2 and/or the CSOR, particularly if Canadian hostages were involved.

[4] To read about the cost-effective merits of parachute units (over armoured or mechanized units), see the experienced views of one of Britain’s former Airborne Brigade commanders (David Benest) in “A British Parachuting Capability?” in “The Journal of Military Operations, Volume 1, Issue 1, Summer 2012”.