Lemons may fly: Canada pondering the purchase of used F/A-18s 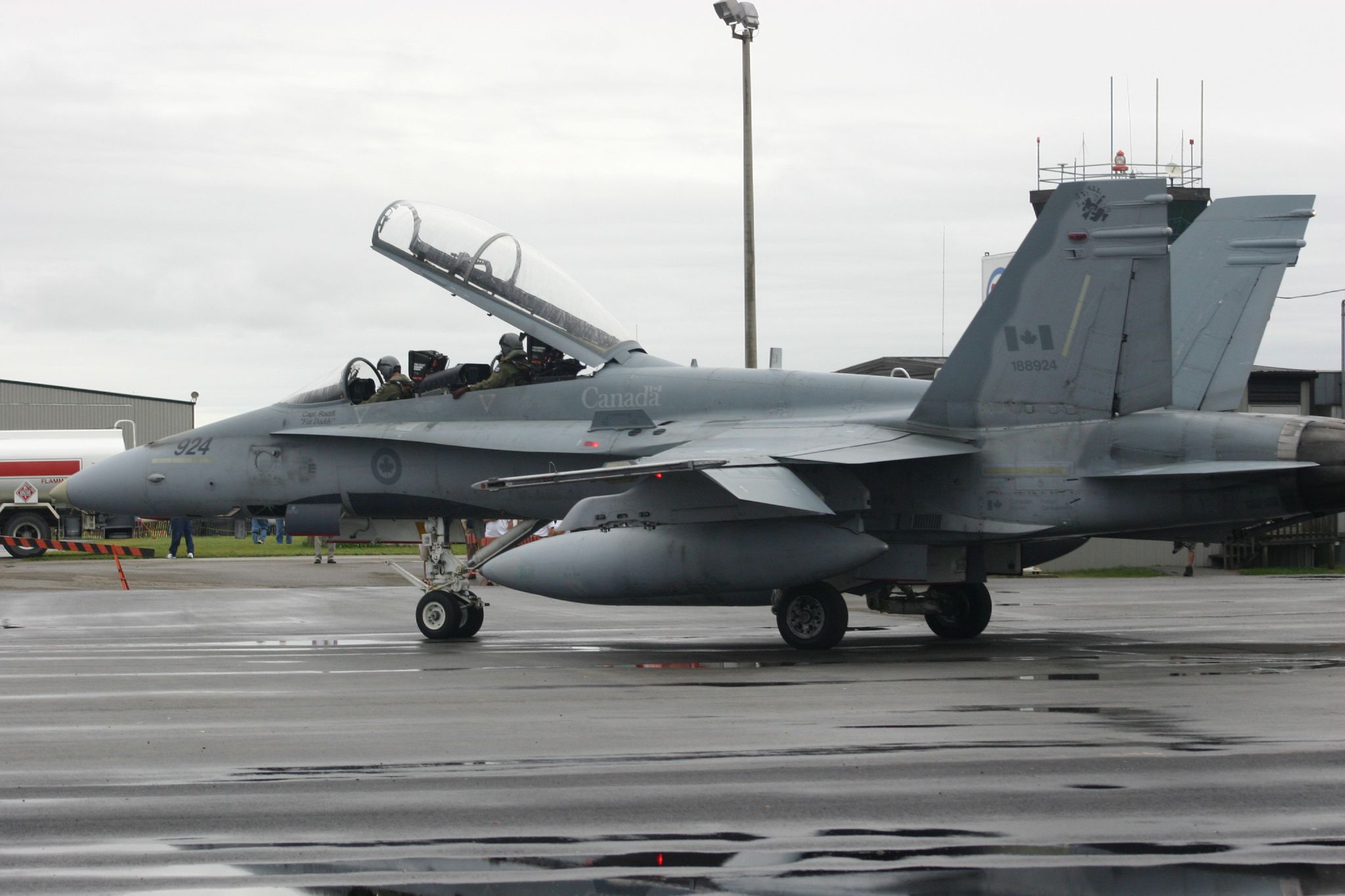 Up until recently, it seemed that the Canadian government would purchase 18 new F/A-18 Super Hornets from the US as the US Navy and the Royal Australian Air Force (RAAF) had done. In fact, it is still suggested on the Public Service and Procurement Canada website. But troubles began when Boeing lodged a complaint with the US Department of Commerce over Bombardier’s C-series passenger jet aircraft. The import duty now lies at 291.63 percent in preliminary countervailing tariffs on Delta Airlines next year. Now the Canadian media is reporting that the government may purchase a number of Australia’s used F/A-18s, which were produced exactly when the CF-18s were.

Boeing’s complaint against Canada’s number one airline manufacture led to condemnation and ire by Canadian officials. Once again, Canadian politics stepped in the way of military procurement. The progress and capabilities of Lockheed Martin’s F-35 has been in question and the continuing delays forced the USN, the RAAF and also the Royal Canadian Air Force (RCAF) to search for an alternative low-impact stop-gap solution until a suitable replacement can be found. A process that continues to be delayed as now it stands that the government will be receiving bid solicitation in 2019.

The current situation for the CF-18 continues to deteriorate. The RCAF operates 76 CF-18s, but only half of those are capable of operating regularly. When it came to the NATO mission in Libya in 2012, where Canada’s contingent ended up accounting for 10 percent of the flight missions, there were already concerns that many of the aircraft were approaching their 8,000 flight hours. In fact, before Libya it was tabled in Parliament that some of these aircraft has used up 73 percent of their flight hours. This was later expanded by David Pugliese, of the Ottawa Citizen, last July. When the Ottawa Citizen published information that was tabled in the House of Commons which detailed the number of flight hours each fuselage had accumulated. Of the 77 aircraft:

Time is slowly running out for the CF-18 fleet and yet there is no tangible plan to replacement them. Australia is in the same boat when it comes to the age of their Hornet fleet; however the Australian government has a replacement contract signed.

The RAAF’s F/A-18s were purchased at the same time as the RCAF purchased the CF-18s – in the 1980s. So the prospect of a an effective stop-gap measure is already diminished with the purchasing of used and aged equipment that are nearing the end of their flight hour ceiling. Especially when the Canadian government has not reinvigorated efforts to hold a fighter jet competition.

But it should not be forgotten that when the CF-18s, and Australia’s F/A-18s, were built by McDonnell Douglas, their flight-hour ceiling was originally estimated at 6,000 hours. A submission to the Australian Foreign Affairs, Defence and Trade Committee Inquiry into the planned acquisition of the F-35 by the Australian Strategic Policy Institute, concluded that 80 percent of their fleet had reached the original 6,000 flight hours by 2015. 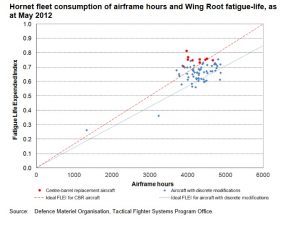 Moreover that each Hornet would reach the “its individual 6,000 flight hour limit at less than 36 years of age” – based on a 168 flight hours per year. This meant that the RAAF Hornet fleet would reach the 6,000 flight hour limit by 2021-2026. This was also echoed by the Australian National Audit Office. The Australian National Audit Office, however, stipulated that the fatigue accrual on the RAAF F/A-18s has been higher than that of the US Navy. According to their data, the aircraft have experienced “higher g and sustained-g loadings which have consumed the fatigue life of certain air frame structures, particularly the center barrel structure.” The RAAF has undertaken a structural refurbishment program since 2003 to keep the fleet airworthy until their Planned Withdrawal Date in 2020. The number of flight hours accumulated is one thing, but how the aircraft are flown during those hours is a much more serious factor to weigh.

The Australian Department of Defence Science and Technology’s Aerospace division, last year, came up with a new structural fatigue algorithm and concluded that the Hornets were not as fatigued as earlier thought. Research Leader Loris Molent stated that “Experiments have shown that fatigue damage occurs due to the growth of cracks initiating from discontinuities (or flaws) that were present in the airframe at the time of manufacture….Any variability in fatigue lives is then mainly due to variations in the size of initial discontinuities or in crack growth rates.” So there is a possibility that the RAAF Hornets may be in better shape.

During the Libyan campaign, military planners were concerned with the overuse of the CF-18s as every combat flight hour could equal one regular flight hour at home because of the added operational stresses during flight. If the RAAF’s domestic use of the aircraft has been more rigorous than the US Navy’s then there should be added concerns with acquiring them as a stop-gap measure. Moreover, there needs to be a serious estimation of what the additional cost of getting the Hornets to RCAF standards and maintaining them will be.

Costs to Maintain an Old Fleet Continue to Rise 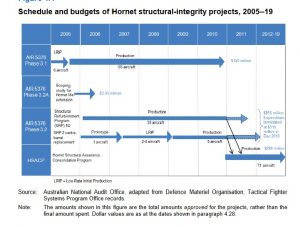 It has been estimated that to keep the current CF-18 fleet operation until 2025 would cost approximately $400 million. And that to maintain them until 2030 would cost up to $1.5 billion. However, that does not factor in the additional costs of maintain any of the F/A-18s from Australia. It seems that the flight hours of the RAAF fleet may not be as dire as the RCAF’s CF-18s, however concerns should be raised over the structural integrity and the ongoing cost of maintaining them until 2030 – ten years after they were slated for retirement. See right for Australian National Audit Office structural-integrity estimate until 2019.

Recent news now suggests that the Canadian government is now estimating that the first replacement fighter jet for the CF-18 (and possible F/A-18) fleet will not be until 2026 – five years later than it was estimated last year. This procurement project, like many in Canada, continues to be delayed due to political reasons and may very well be delayed once more.

The reality now is that Canada quite possibly could purchase an assortment of aged surplus F/A-18s from the RAAF. It is only a possibility because it has not been confirmed by the Defence Minister. But this was an offer which was extended by the Australians the day after the Boeing lodge their complaint. Definitely a political olive branch.

Interestingly enough, Australian Defence Industry Minister Christopher Pyne stated that it is his “intention to travel to Ottawa in the second quarter of [2018], when [he] will talk to the Canadians about this and their upcoming Future Frigate project and potential involvement of Australian companies.” For those who are not aware – Australia, too, is undertaking a massive fleet procurement project as Canada is. Australia has received bids from BAE Systems (Type 26 Frigate); Fincantieri (FREMM Frigate), and Navantia (redesigned F100) and these three competitors have been short-listed to polish their design proposals.

It would be interesting to see if the offer of the F/A-18s was not only a good-will gesture to an ally, but also a Trojan Horse to gain access to Canadian contracts related to the National Shipbuilding Strategy. That could potentially negatively impact Canada’s domestic supply chain for the Canadian Surface Combatant Ship.

One hopes that the Canadian government is not merely looking at the RAAF F/A-18 Hornets with flight hour log books and that they will be aware of battered and bruised fuselages. But then this is Canadian defence procurement and the government is in a bind. This may rightly so echo the hasty purchase of the used British diesel-electric submarines and the plight they have reaped after.