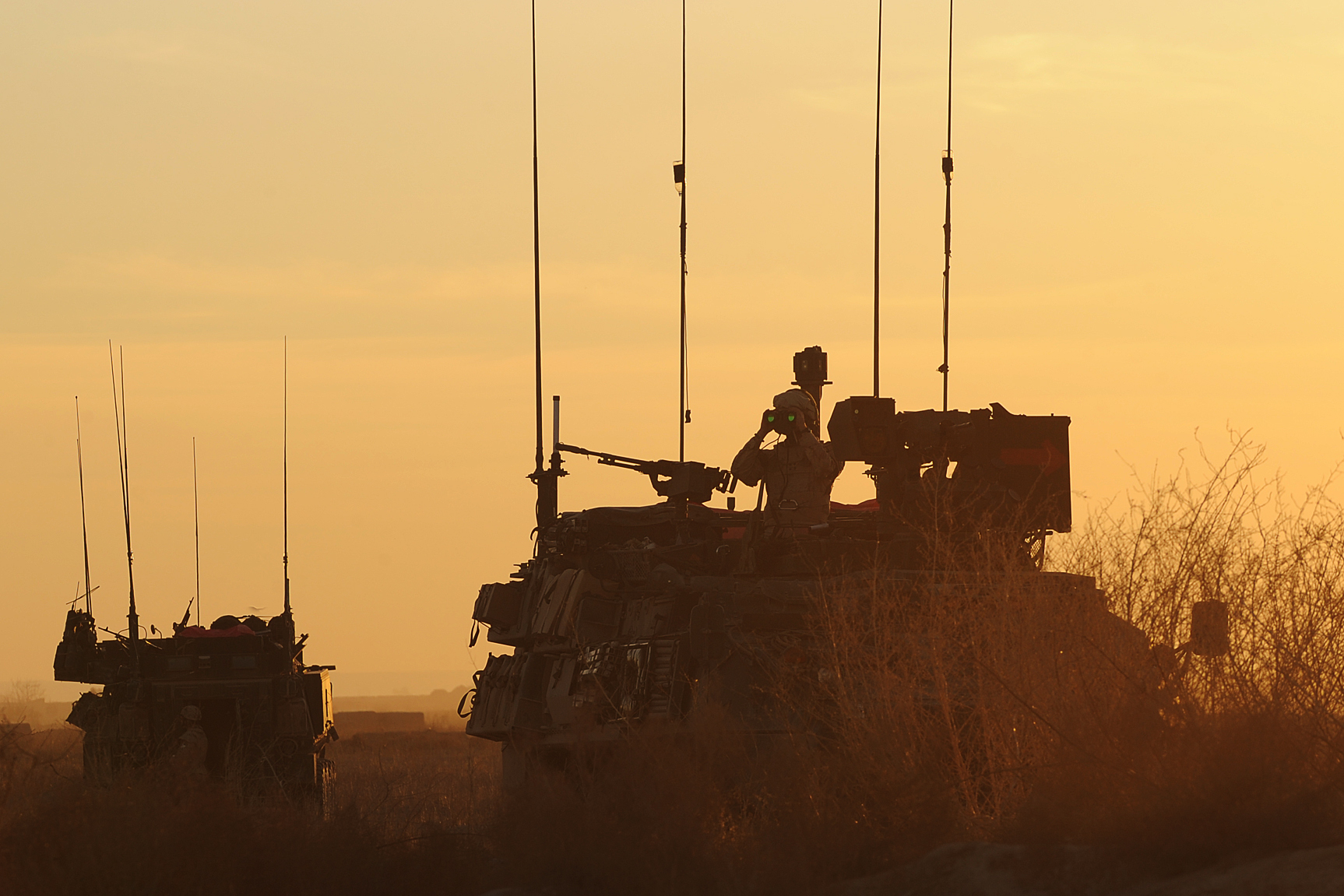 With the demise of Canada’s Close Combat Vehicle (CCV) competition[1] and the adoption of an upgraded LAV (UP/6.0) for Canada’s mechanized infantry battalions, one would think that all discussion over a new Armoured Fighting Vehicle (AFV) for our soldiers would have ceased.  The CCV competition was a Department of National Defence’s search for an infantry carrier intended to accompany our Leopard 2 main battle tanks into action.  Unfortunately, it bogged down because of lack of project definition (ie. whether the vehicle should have been tracked or wheeled) and other complications.

The capability gap within Canada’s mechanized infantry units has been clouded as of late. Canada may have contributed the lion’s share of a battle group (reinforced infantry battalion) to NATO’s Baltic region (Latvia), but there are storm clouds on the horizon, both in the east with Russia[2] and in the west (North Korea and China).  Moreover, no one ever really can predict when the Canadian Army will be deployed on a mission in Africa or elsewhere. And despite putting a brave face on the matter, there’s now an unspoken “capability gap” in Canada’s Army which needs to be addressed and revisited.[3]

Though our LAV III’s provided a fair degree of protection to our troops in Afghanistan, they were not immune to the effects of Improvised Explosive Devices (IED’s).  To exacerbate matters, their off-road mobility was often curtailed during operations, necessitating recovery from a tracked vehicle, as seen in the picture below.  Enter the CV90 AFV’s. It was a contender during the CCV competition – but was the only tracked contender and was up against wheeled competitors.

The development of the CV90’s series of tracked vehicles began in the mid-1980’s and was a response to the needs of the Swedish Army for a family of armoured combat vehicles with high tactical and strategic mobility, anti-tank and air defence capability, high survivability and protection.[4]  The CV90 vehicles are the result of a joint venture between the Swedish defence firms Bofors Defence and Hagglunds.  Essentially the CV90 is a family of modular ground combat vehicles designed to carry out modern mechanized unit’s missions.  All nine variants of the CV90 family are all-terrain capable, extremely agile, with minimized radar and IR signatures while maintaining high survivability and reduced maintenance costs.  These include the CV9040 air defence vehicle with the well-proven 40mm Bofors gun, the CV9030 with the 30mm Bushmaster II cannon (and now CV9035) armoured (infantry) fighting vehicles, plus the CV90120 light tank with a 120mm/L50 smooth-bore gun.  Production began in 1993 and to date more than 1,200 vehicles are in service with seven nations, four of them NATO members.[5]   Thus far, Norway has deployed its CV9030’s to Afghanistan (ISAF), while other nations have used them on UN operations.

Like all members of the CV90 vehicle-family, the CV9035 weighs in at the high end of the 20 to 30 ton range and is powered by a single Scania DI16 diesel engine providing 600-670 hp.  The CV90’s turret is electrically operated and houses a SAAB-designed “Universal Tank and Anti-Aircraft (Fire Control) System” (UTAAS) sight providing day/night and all-weather detection and fire control capabilities.[6]  The CV9035 MkIII is the next generation of the CV9030 infantry fighting vehicle and features a Bushmaster III 35mm 50-caliber cannon[7] as main armament to counter emerging threats (such as UAV’s[8]) with a computerized fire control solution, new programmable ammunition, a commander’s independent sight giving it a “hunter-killer” capability, higher protection against top-attack munitions and mines through a new armor package, third generation Forward-Looking Infrared (FLIR), and a defensive aids suite including laser warning receivers and smoke launchers.  More recently, as of December 2016, these aids have been significantly enhanced with the addition of the Israeli-designed/supplied “Iron Fist” Active Protection System (APS), which uses radar to automatically detect, track and eliminate threats posed to the vehicle and its crew.[9]  The Netherlands’ adoption of “Iron Fist” for its CV9035’s makes it the first NATO nation to have an APS system on any of it combat vehicles.

Industry developers will be interested to note that the CV90 series vehicles come with an open electronics architecture – meaning that nation-specific combat radios can be incorporated easily.  So present systems like the SINCGARS family of VHF tactical radios or AN/PRC-117/119 satellite radios (used by FAC’s/JTAC’s, plus Special Forces (SF) teams) isn’t a problem.  And, in concert with Canada’s economic development strategies, there are significant industry-related manufacturing spin-off’s for the CV9035.  Should Canada elect to purchase a battalion-set for its mechanized infantry, about fifty (50) vehicles should suffice, including forty-five (45) CV9035’s, three (3) CV90 FOV’s (Forward Observation Vehicles – for calling in artillery fires and airstrikes) and two (2) CV90 FCV/CP (Forward Command (Post)) Vehicles).  At a paltry $5 million (USD) for each CV9035, it should cost the Canadian taxpayer somewhere in the neighbourhood of about $350 million (CAD).  As tensions with Russia in the east increase, coupled with the near-term possibility of conflict with North Korea[11] – and even emerging threats to sovereignty over our own arctic territories[12] – the Canadian Army might appreciate an early Christmas present from Ottawa this year.  And again, you never know when our LAVs might be stuck in the mud elsewhere in the world in some hot spot. It’s nice to know it will come ‘packaged’ with tracks…

[1] Submissions at the time included the CV90 series (Sweden/UK), the VBCI from Nexter (France) and the LAV from GDLS (Canada).  In the end, the decision was made to simply upgrade the existing LAV III’s (initially known as the LAV UP(grade), but now known as the LAV 6).  Then Commander of the Army, LGen. Leslie lamented the demise of the CCV, noting that funds were available.

[3] For further discussion on the Canadian Army’s position regarding the interoperability of its mechanized infantry and armoured units, see “Waypoint 2018: The Canadian Army Advancing Towards Land Operations 2021”.

For a further examination of the CV9035 Mark III-series vehicles, visit the Deagel website at:

[5] Sweden, Netherlands, Denmark, Norway, Estonia, Finland and Switzerland.  The Swedish CV-9035 was one of five vehicles assessed by the US Army’s Ground Combat Vehicle Non-Developmental Vehicle Assessment effort in 2012.

[7] The Bushmaster III is the largest model of the Bushmaster family.  The superb 25mm Bushmaster I is mounted on Canada’s LAV’s, while the 30mm version is mounted on the US Army’s new ‘Dragoon’ (Cavalry) Stryker.  The Busmaster III fires the 35 x 228mm NATO round, which is widely used in air defense systems.  By replacing the barrel it can also fire the 50mm Supershot (Counter-UAV) munition.  The 35mm model is easily identified by its larger muzzle brake, although some are fitted with the smaller, two slot, muzzle brake as fitted on the 30mm model.  The Bushmaster III cannon has a muzzle velocity of 1300m/sec with Armour-Piercing Fin-Stabilized Discarding Sabot (APFSDS) ammunition, and approximately 1000m/sec with standard NATO ammunition.