Book Watch: The Invention of Russia: From Gorbachev’s Freedom to Putin’s War 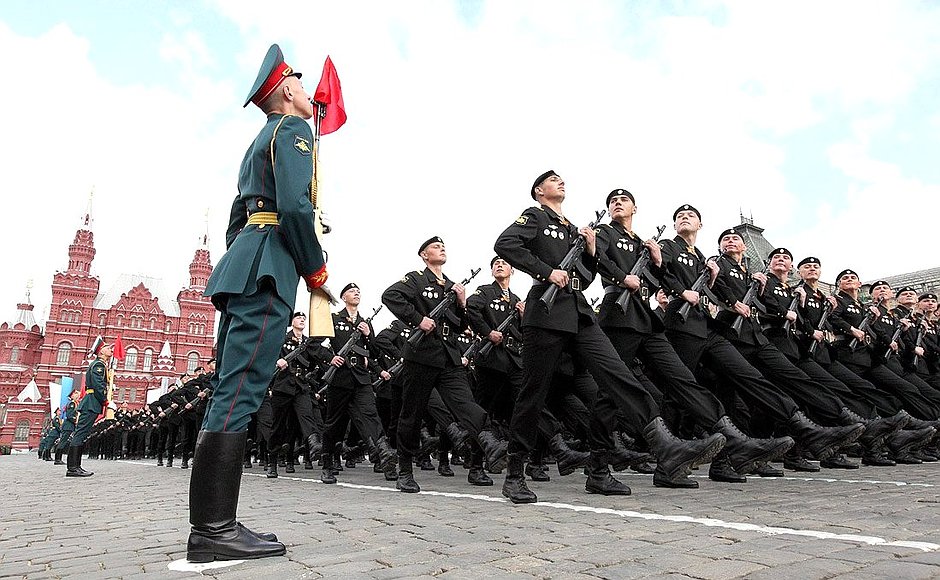 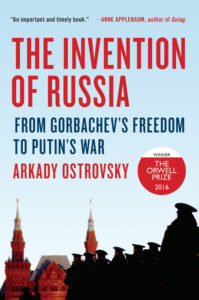 With the recent 25th anniversary of the collapse of the USSR and increased evidence of Russian interference in the recent U.S. Presidential elections and ongoing political influence operations across Europe, Arkady Ostrovsky’s The Invention of Russia: From Gorbachev’s Freedom to Putin’s War is a timely and excellent review of the evolution of Russian media and propaganda—particularly those who have composed and maintained the “storyline” of the country—over the past 25+ years.

Ostrovsky has a unique perspective than most scholars would. Ostrovsky is a Russian national who left for the U.K. in 1992 to undertake his PhD, returned to Russia about a decade later as a journalist with the Financial Times and then with The Economist. While describing his initial euphoria and optimism at the time of the USSR’s demise in 1991, what he witnessed upon his return to Russia raised the question of what, if anything, had really changed—a former KGB operative (Putin) was now President; this President had restored the Soviet anthem as Russia’s; he began reasserting Russia’s role in its former sphere of influence (e.g., Chechnya and later Georgia and Ukraine) and more recently, beyond (e.g., Syria); and oversaw the country’s return to authoritarianism albeit with a new governing ideology—nationalism in “neo-Stalinist garb”—rather than communism.

The book begins with the 2015 assassination, just a few steps away from the Kremlin, of Boris Nemtsov, a friend of the author’s and a favorite target of Russian disinformation, in such a fashion that demonstrates, in Ostrovsky’s view, how Russia’s propaganda machine led to the “aggression, hatred, and chauvinism” that killed Nemtsov. Regarding the ongoing war in Ukraine, for which Nemtsov was an activist against, Ostrovsky says the machine turned “xenophobia and aggression into a norm and civility into an offense” in Russia. In fact, Ostrovsky claims that, after Russia’s initial intervention in Ukraine, Russia’s information war created “such levels of hysteria” domestically that were akin to “something out of a documentary of 1930s Germany”. Nevertheless, Russian propaganda and information warfare is not new as Ostrovsky argues that “lies and repression were the two main pillars that upheld the Soviet system” by helping to construct and maintain an alternative reality. Nevertheless, he opines that today’s situation in Russia is far more dangerous than during the Cold War since “Russia’s current rulers were shaped by what they consider to be their loss of the Cold War, and their feeling of rejection by the West, despite all their fabulous wealth”. Nearly 30 years after Gorbachev initiated his reforms (perestroika and glasnost) which helped to end the Cold War, what has emerged in Russia is a mix of “hostility and jealousy,” Ostrovsky writes. So, with all that, Ostrovsky seeks to answer what happened between the end of USSR in 1991 and now?

According to Ostrovsky, no single event led to what we see today in Russia compared with 1991. Rather, the changes that have taken place are based on a combination of factors—lack of sufficient reform, rise and power of oligarchs, a poor economic situation, the passivity of the general population, and the lack of a responsible and accountable elite as in the West. But, Ostrovsky avers, the main culprits of such changes are those in the media (e.g., journalists, TV executives and personalities, propagandists, etc.) since they are the people in charge of the “narrative”.

Why is this so? Ostrovsky argues that these people, many of whom he personally knows, are responsible for “inventing” contemporary Russia and its narrative, and are not merely the transmitters of this narrative. He goes on to say that “Russia is an idea-centric country” in which “the media play a disproportionate role in it”. Hence, these people are as much responsible for Russia’s emergence from authoritarianism as its return to it. He describes how when Putin first came to power in 2000, his first step as President was to take control of TV (e.g., NTV, Channel One) which he has used since as his main tool of power, especially in his war against Ukraine as well as his recent intervention in Syria. The result of this control is that it enables Putin to compose and maintain his own history based on the narrative that Russia is a global player who cannot be isolated. In other words, “whoever controlled the media also controlled the country,” Ostrovsky claims. In fact, for Putin, “things that didn’t exist could be turned into reality” via TV. Examples include the “polite green men” (aka “little green men”) seen in Crimea before Russia’s annexation of the peninsula, and the claim that Western-backed Ukrainian “fascists” were behind the coup that overthrew former President of Ukraine Yanukovych.

Overall, Ostrovsky’s work is an excellent addition to the growing literature on the important role the media—particularly in regard to controlling the “narrative”—plays in Putin’s Russia. One of his most novel points is refuting the claim, common in Western analyses, that Putin is solely to blame for Russia’s dire economic situation and generally negative global image. Instead, Ostrovsky argues that placing the blame in such a way misses the point that Putin is “as much a consequence as a cause of Russia’s ills”. Furthermore, Ostrovsky’s recap of the evolution of the key media players and outlets from the Gorbachev era to the present day is particularly refreshing. Lastly, what’s particularly important with this book, especially for national security professionals, is its relevance to Russia’s so-called “hybrid warfare” tactics in Ukraine over the past couple of years and more recently its interference in recent U.S. elections and European politics. From energy supply cuts and trade bans, to supporting “influence networks” (e.g., political parties, lobbying groups, etc.) across Europe, to conducting propaganda and disinformation domestically, regionally, and globally, Russia has manipulated the media and weaponized information at an unprecedented scale and to its advantage.

The book can be found here at PenguinRandomHouse.

Disclaimer: Please note that the views expressed in this document reflect the personal opinions of the author and are entirely the author’s own. They do not necessarily reflect the opinions of the U.S. Agency for International Development (USAID) or the United States Government. USAID is not responsible for the accuracy of any information supplied herein.