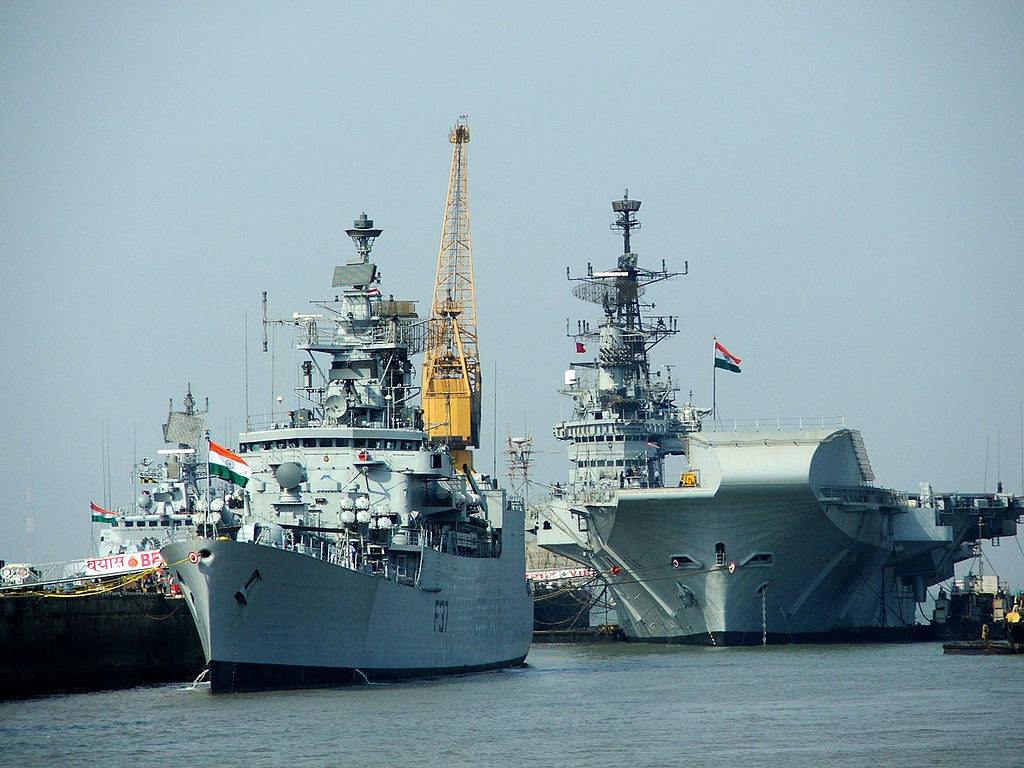 The Indian Navy has this week formally launched its indigenously-built 37 thousand tonne INS Vikrant aircraft carrier, which is slated to enter full operational service in 2018. It marked a momentous occasion that started out well, but which was horribly overshadowed by the loss of INS Sindhurakshak. The latter, a Russian Kilo-class diesel electric submarine, sunk in the port of Mumbai and took all 18 servicemen with it. The Indian Navy has been able to recover the disfigured remains of at least three sailors and hope that any survived is quickly dissipating. Some commentators have taken this opportunity to make the point that the Indian Navy has a long road ahead before it becomes a modern naval power.

But accidents do occur and are sometimes unavoidable. Such is the nature of accidents and mishaps no matter how tragic. A full report on the incident is expected within four weeks. Others have chosen to use the Vikrant’s launch as a focal point to widen discussion on the evolving aircraft carrier race between India and China. Earlier this year, the Chinese launched its refitted Soviet aircraft carrier bought from the Ukraine, now christened as the Liaoning, and a Chinese J-15 jet aircraft fighter landed on its deck.

If a so called ‘aircraft carrier race’ is now underway, India is already nautical miles ahead. India has been operating INS Viraat since its introduction into the fleet in 1987. The INS Viraat will be known by Royal Navy enthusiasts as the decommissioned HMS Hermes. India’s acquisition of a former Soviet Kiev-class aircraft carrier Admiral Gorshkov, in contrast, has been delayed not once but multiple times. But of course, this is more than just a numbers game. India has the operational experience of what is a demanding, and very dangerous, environment. Former US Top Gun pilot, John Chesire, described what normal operating circumstances are to DefenceReport:

Imagine trying to do a dangerous job with vital precision in such a demanding environment. Thirty knots of wind over the deck; loud and screaming jet engines; hot and burning jet exhausts; chains, chocks, and wires to easily trip over; catapult and arresting gear thumping, screeching and actually jerking the massive ship; foul smelling jet fuel burning the eyes and nose; launching and/or recovering 25 tons of aircraft at 165 MPH every 45 seconds; body and chest vibrating as aircraft on the catapult go into their loud and thundering afterburner, etc.

Of course, India has proven that it has the capacity to build a 37 thousand tonne maritime behemoth. But something even more remarkable happened this past week. The reactor for India’s first domestically-built nuclear-powered cruise missile submarine, INS Arihant, went critical. In other words, the reactor is now operational.

The INS Arihant is modified from the Soviet Charlie-class (Nato designated Akula-1) subs, which have been leased to the Indian Navy in the past. The successful powerplant mod means that India is one step closer to having a first- or second-strike capability, depending on strategic doctrine. India wants to have three nuclear-powered ballistic missile submarines and six nuclear-powered attack submarines in the future. Even with more conservative numbers, this ambition will have a huge impact on regional deterrence.

Last year, India developed its own submarine-launched ballistic missile (SLBM) and, with this step forward, joined a much more exclusive club already occupied by China, France, Russia and the United States – previously the only countries able to produce SLBMs. The Indian K-15 purportedly has a range of 180 miles (290 kilometres) and a 2,200lb-payload (1,000-kilogramme). This is a significant leap for India, but it is doubtful that there is exuberant jubilation in the Indian admiralty.

Before a nuclear-powered navy can be viable, India must address its uranium issues. India’s nuclear fuel cycle evolved domestically after the country was sanctioned because of its 1974 nuclear tests. India faces a uranium shortage and its nuclear fuel cycle has had to evolve to meet domestic limitations. India’s three-staged nuclear fuel cycle has evolved to allow the integration of naturally occurring Thorium-232 (India has approximately 25 percent of the world’s reserves of the naturally occurring isotope). India has been facing a uranium shortage for years. In 2003, India reduced its nuclear power generation in its reactors from 90 percent to 76 percent capacity. In 2007, it was acknowledged that all nuclear power plants were operating at a capacity of 60 percent or lower.

The nuclear situation in India is changing thanks to the US-Indian Civil Nuclear Deal. Negotiations for the Nuclear Deal began with the George W. Bush administration and gave India the status of a de facto nuclear weapons state. India has not signed the Non-Proliferation Treaty, nor the Comprehensive Test Ban Treaty. Now countries are permitted to sell nuclear reactors and uranium to India. India was set to gain access to the nuclear market and the Bush administration saw it as a success to rein in India’s nuclear reactor programme. However, India can define what reactors are under civilian and IAEA regulations and what reactors can be for military purposes. Moreover, six of the fourteen civilian reactors already “were subject to or slated for safeguards. The remaining eight civilian reactors that will be under new regulations have until 2014 to become compliant.

As India gains more access to the international nuclear market and reforms its domestic uranium mining and processing, its domestic uranium availability will increase. This means that in the future, India will be able to expand its military reactor programme and increase the availability of enriched uranium for naval nuclear reactors. The question remains whether the Indian Navy will remain within the regional theatre or expand to more global operations.

DefenceReport’s weekly recap is a multi-format blog that features opinions and insights from DefRep editorial staff and writers. The opinions expressed here are the author’s own and are separate from DefRep reports, which are based on independent and objective reporting