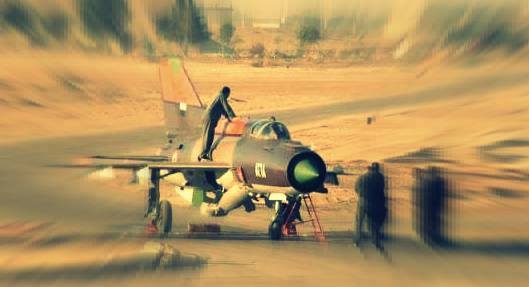 President Obama’s 2009 Overseas Contingency Operations (OCO), a supposed rationalizing of his predecessor’s so-called “Global War on Terror” (GWOT) has reached yet another crescendo in its operations against the Islamic State of Iraq and al-Sham (ISIS). The US and its coalition have been conducting airstrikes for weeks on end now. Defence analysts could had more to say about what hasn’t been targeted in airstrikes simply given that there is a dearth of viable targets in Iraq. You can read more in our op-ed to iPolitics.ca.

ISIS has, yet again, stormed the international media, and this time it concerns ISIS operating a fleet of its own fighter jets. How did the group manage to acquire fighter jets? The London-based Syrian Observatory for Human Rights (SOHR) reported that 3 fighter jets were seen over Aleppo. The aircraft were thought to have been MiG-21 Fishbeds and swing-winged MiG-23 Floggers It is believed that the aircraft were operating out of al-Jarrah airbase and made only several sweeps of the area but nothing else. It is suspected that former Iraqi fighter pilots have been training ISIS pilots and may have even flown the aircraft themselves. ISIS took control of Tabqa Air Force base in Raqqa province on August, 24, and it is believed to have captured the aircraft from that location.

The US Central Command (CENTCOM) quickly cast its doubts on claims that ISIS can operate warplanes at all.  US skepticism concerning ISIS’ capabilities poorly complements the US government’s underestimations of the group from the very beginning. Senior US officials, rather than conducting an audit of ISIS’ true abilities have clearly cast the possibility of an increasingly dangerous ISIS aside. Reports were also made of ISIS having flown captured Blackhawk helicopters over a parade in Mosul. These claims are still disputed as some critics say that refuting the prospect has yet to reconcile with eyewitness accounts of the machines flying overhead as well as assertions that Mosul airport held a fleet of US Blackhawks that were loaned to security forces by the US. Images from ISIS videos showed a robust supply of military equipment including tanks and other vehicles including US Humvees. Insurgents were also seen alongside Bell 407 attack helicopters at a military air base near Duluiyah. Many ISIS members know how to use the equipment, some of which is in perfect condition.

This is also a propaganda war. It took weeks for the US to decide on an operation codename for its operations in Iraq and Syria. The airstrikes, under Operation Inherent Resolve, are accomplishing very little as many of the airstrikes are pegging off the odd pickup truck with what intelligence sources believe to be carrying ISIS fighters. There is a lack of intelligence on the ground to direct these attacks. In Iraq, the Iraqi Army and the Kurdish Peshmerga forces can be accredited with scant accomplishment, and ISIS has not only been able to consolidate much of its territory, it has also made significant gains in Iraq and presses on in Syria.

General Austin did not provide an official assessment of the air campaign. “My personal opinion,” Austin told the media, “is that they’ll be much degraded from what they are now and so I think a well-trained force that’s well-equipped and well-led will have a real good chance of being successful.”

Unfortunately, the Iraqi Army is not on the offensive and remains vulnerable to ISIS attacks. Recently, ISIS fighters overran an Iraqi Army training camp near Baghdad. ISIS continues to make gains in Anbar province, where the Iraq Army is ceding ground and bases. Haditha is said to be encircled by ISIS and is continuing to hold out as the only large town in that province that has yet to be taken by the group. Baghdad experiences bombings and assassinations almost daily. In other words, the situation in Iraq has not improved much despite the air strikes.

Another potential misapprehension lies in the US’ understanding that ISIS is planning charge Baghdad frontally. There are also more than one way to take a city. Placing their hopes in a large Iraqi army intending to face ISIS at or in the city of Baghdad smacks distinctly of tactical, operational, and strategic oversight. If ISIS succeeds in forming a large ring around Baghdad, it could steadily close it over a period of weeks.

Bill O’Reilly’s suggestion of raising a vigilante army to fight ISIS only highlights the fact that there have been no serious gains and no coherent strategy, and signals further miscalculations of ISIS by coalition forces. President Obama announced plans that the US would train 5,000 “moderate” members of the Syrian Free Army. This plan is still being debated and does not seem to be gaining a foothold.

While gravely misreading ISIS, it’s becoming clear that the US will be forced to look to past events if it should like to unearth critical precursors to these egregious events. US prison camps proved healthy breeding grounds for ISIS fighters. Now in control of a considerable territory, Western governments might not have expected to hear that people are able to co-exist with ISIS and live under their rule not only because they’re afraid but also “partly because they have seen legitimate justifications for the decisions”. In some places, like a-Raqqa, ISIS has opened mills (al-Salhabiyah, Salouk, and Tel Abyad in western a-Raqqa) and has ensured that a surplus of bread is available to people. Some residents say that the electricity situation is good, the situation with water and water supplies is very good, and that daily life is generally good. With ISIS in control of many cities, people have claimed that there are no clashes at all, that there is work, and that schools are working well.

*Romaniuk and Webb are the co-editors of Insurgency and Counterinsurgency in Modern War which is slated to come out in 2015.