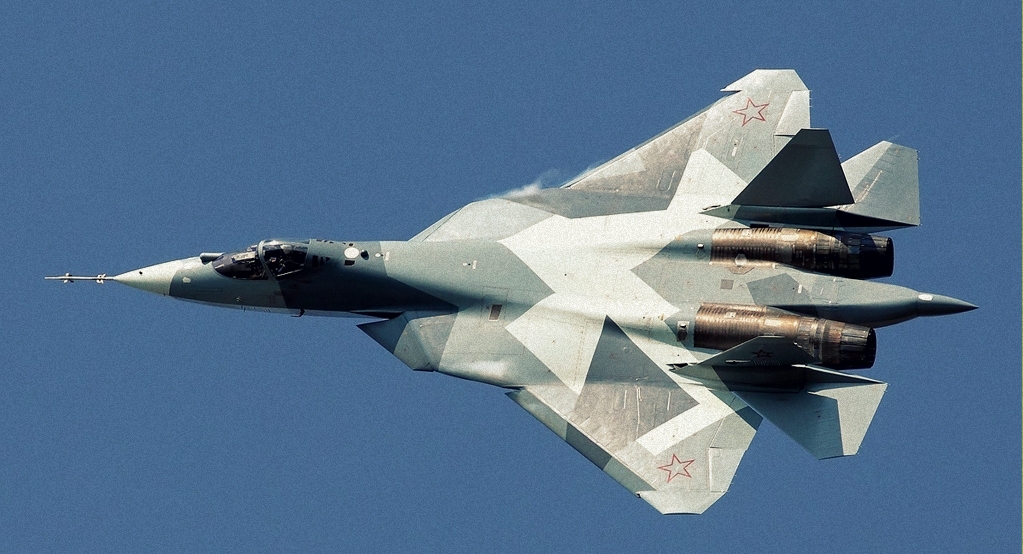 Funding is expected to be approved shortly for the next phase of development of the Sukhoi T-50 fifth generation strike fighter aircraft. The prototype, which is a product of joint Russian-Indian funding, has been compared to several contemporary fighter and cross-mission platforms. One of those offered for comparison has been the F-35 JSF. While Sukhoi R&D and Russian-Indian investors would prefer to compare its capabilities to that of the F-22, Americans look on the T-50 as the principal adversary to the JSF. That equation, however, falls short on several levels. Principal among them is stealth technology, which both the JSF and T-50 claim as one of their primary design features and which helps place them in the fifth generation ranking. While the T-50 is said to be equipped with advanced integrated stealth technology – in accordance with strict Russian design standards – the F-35’s stealth capability is nominal. In fact, it would be misleading to say that it is stealthy at all stages of flight and under the observation of all airborne and ground-based radars. Rather, it is likely more accurate to think of the JSF as stealth-like, or moderately observable. More will be known when the first Indian prototype is delivered in 2014, but critics expect the T-50 to outrank the JSF in this critical category. An important feature will be how designers finally decide on weapons payload distribution – whether they be on hard attachment points on the external fuselage or, as is the case with the F-35, will carry weapons on a combination of internal and external attachment points. It is likely the T-50 loadout will vary broadly from one nation’s air force to another. Russia is preparing some one thousand platforms for export. Aerospace designers have conceded that the USD 11 billion (GBP 7 billion) project may be forced to compete with next generation UAS, which are both less expensive and require less stealth technology in order to achieve low-observable status.

Switzerland could potentially delay its order of Saab Gripen strike fighter jets. The procurement of some 22 of the fighters has been threatened with delay, and worse, from Swiss parliament who many say has viewed the acquisition in less than a positive light. Switzerland is keen to combine its order with that of Sweden for what would likely be a reduced cost. The European nation’s choice of replacement for its ageing F-5 fleet fell to a choice of the Gripen, the Eurofighter and the Rafale. Delivery of the Gripen fleet is expected to be delayed to 2020, at the latest.

General John Allen, Commander of International forces in Afghanistan, has claimed that the ‘stress’ of Ramadan has resulted in the recent ‘green on blue’ attacks from Afghan forces. The targeted attacks, which have increased over the past several years and claimed the lives of ISAF troops from several countries, have also been met with scrutiny from international media, who have focused on US withdrawal from Afghanistan in 2014. Media have questioned efforts by ISAF personnel to prepare Afghan forces to take over security operations in that country, and have particularly focused on the pending deadline as one that is in risk of resulting in a Taliban resurgence in many parts of the country. In contrast, ISAF media operations have accelerated their campaign to control and ‘shape’ the messages emerging from the conflict. Some critics say it is an effort by ISAF and the US to wash their hands of the country’s tenuous security situation even before a full withdrawal occurs. They point to the US military’s tighter control of news coverage from the war – from not allowing press to discuss body counts to denying embedded reporters access to frontline areas unless under close observation and control by ISAF operational units. Afghanistan’s spartan media coverage contrasts significantly with that witnessed during the Vietnam War, as well as more recent conflicts, including Libya.

Mexico’s Zeta cartel, which is responsible for propagating drug-related violence in much of the country, has reportedly seen its leadership change hands as a result of a power struggle. Miguel Angel Trevino Morales, authorities say, has wrested control from Zeta founder Heriberto Laczano Laczano in what appears to be a turn for the worse. The recent changeover has resulted in escalated violence in Mexico’s interior. Other gang leaders have called for a united front against the cartel and its new leader, who has been cast as a ruthless and sadistic murderer.

EA-18G Growler Australia has finally confirmed its anticipated purchase of the EA-18G Growler, making it the only other nation besides the US to fly the world’s most sophisticated airborne electronic countermeasures platform. The confirmation follows recent cooperation agreements between US and Australian forces in the region.