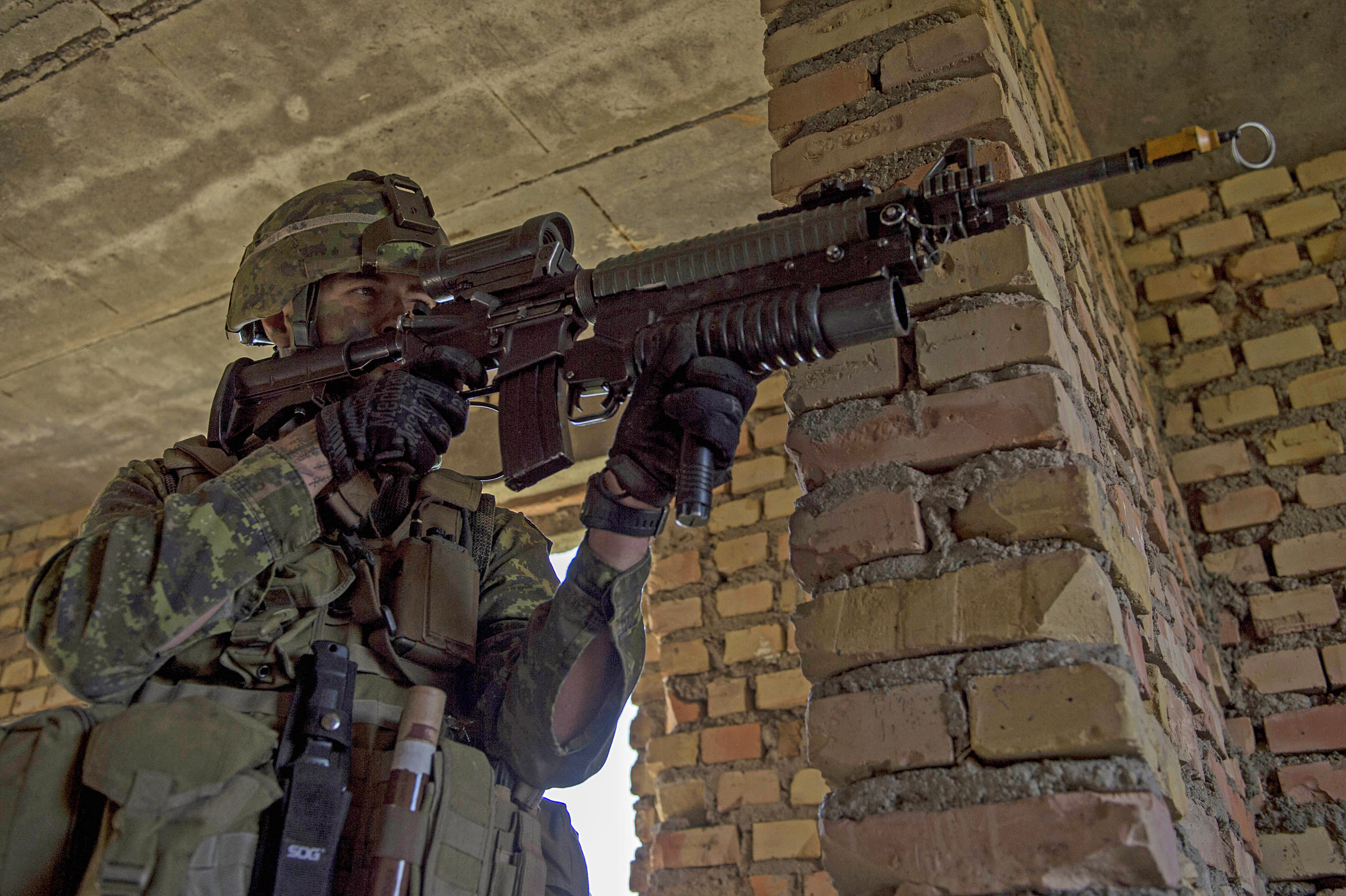 What nature of ground force should Canada deploy to Latvia?  Though publicly available numbers differ, it will likely be a reinforced Army infantry battalion (ie. Battle-Group) of approximately 1,000 personnel.[1]  Though the mission of this organization will likely be multi-faceted, its primary role would be to provide a credible conventional deterrent to any Russian military incursion, in concert with other NATO and Latvian military forces.

What then is the nature of the threat facing Latvia’s sovereignty?  Placing aside the obvious preliminary discussion about Russia’s ability to foment/conduct an ethnicity-based ‘hybrid’ conflict, the answer to what Canada’s Battle-Group (BG) will face as an immediate conventional concern is a short one: considerable.  While both Estonia and Lithuania would face Russian forces on two geographic fronts (sea and land-border with Russia), Canadian troops in Latvia could face incursions from Russia on three (3) fronts – the Baltic Sea to the west, the Russian mainland to the east, plus those Russian forces committed from the Kaliningrad (Autonomous Russian) Region to the south.  Given this, any reinforcement and/or resupply efforts will necessarily come via air or sea, both of which will likely be highly contested by Russian military forces.  There is of course a ground avenue via Lithuania, but they too will likely be busy. Undoubtedly, a detailed threat assessment will bear all this in mind.

Amidst present discussions of the Canadian force being a ‘trip-wire’ (or worse, a ‘speed-bump’) for NATO, what type of conventional force would it be?  Here again, the answer is somewhat complex.  Given the nature of the Russian heavy ground (tank and armoured infanty), air and naval forces that would likely oppose the Canadian presence, the ground force will need to be mobile, well protected (to minimize casualties) and potent.  In all likelihood, it should likely be a heavy formation (armoured, armoured cavalry, armoured infantry or some combination thereof).  Our Leopard 2A6’s would be a crucial ingredient of this force.  Unfortunately, as capable as our existing fleet of LAV-III’s are, they would not likely be an appropriate solution, despite their ease of deployment.  Though these vehicle’s defensive armour can withstand up to 14.5mm caliber in the frontal area, plus 12.7mm (.50 cal) around the remainder, they would be very short work for any Russian 30mm gun as deployed on its BMP-2 armoured infantry fighting vehicles (AIFV’s).[2]  And though the LAV-III’s main 25mm gun is potent, US ‘Strykers’ (based in large part on the LAV design), armed only with .50 cal and 7.62mm machine guns, are giving serious consideration to up-gunning to 30mm, so as to at least be up to par with most Russian AIFV’s (such as the BMP-2).  In early 2015, the US’ 2nd Cavalry Regiment (based in Romania) planned to the make the move to a 30mm gun-system a reality.[3]

Given the above, Canada needs to re-open the discussion over the purchase of (tracked) ‘Close Combat Vehicles’ – not as a debate (as in the past), but as an urgent operational requirement (UOR) for the initial Army unit being deployed.[4]  Eighty (80) AIFV’s (incl all variants) should suffice.[5]  Apart from the main vehicles, fitted with at least 30mm guns, there would also be dedicated anti-armour vehicles with TOW missiles, mortar carriers (for 120mm mortars) and (often overlooked) air defence vehicles incorporating either Stinger or RBS-70 missiles.[6]  Troops would also deploy with these crew-served weapons configured as man-portable air defence systems (MANPADS), plus the Javelin (or equivalent) anti-tank guided missile (ATGM) (another man-portable system) in order to complement any ground-based direct fire weapons, such as the 120mm gun on our Canadian Leopard 2 main battle tanks (MBT’s), or the potent 30mm gun on our AIFV’s.

Naturally, there would be a host of logistics and training-related activities necessary to actuate such an entity, involving considerable initial financial outlay; however, there is also another cost associated with not providing such capabilities to our army unit – that is, the cost in Canadian lives serving at the tip of NATO’s spear (with the attendant cost of a diminished reputation amongst our allies and enemies).  For a professional army like Canada’s, our troops deserve the best that money can buy.  The best for the best.

All three (3) ‘jump companies’ should be folded into the newly ‘reactivated’ “1st Canadian Parachute Battalion” (aka 1 Can Para) – trained for both parachute and air assault operations – totaling about 650 personnel (all ranks).  Though under Canadian command, and due to limitations in strategic airlift (C-17/CC-177 and C-5) this battalion could conceivably (for certain ‘joint’ operations) come under operational command of the 82nd Airborne Division, becoming the ninth (9th) (vacant) parachute battalion of the division.[7] When Canadian Army troops from 3 PPCLI first deployed to Afghanistan in 2001, they came under command of the ‘Rakkasan’ Brigade of the US 101st Air Assault Division.

[1] The Army infantry battalion (600-800 troops) would be reinforced by a tank squadron (company-sized) with approximately twenty (20) Leopard 2 main battle tanks, a battery of six (or eight) 155mm self-propelled (armoured) howitzers, an engineer squadron (company-size) plus other ground force ‘enablers’.

[2] If it were the BMP-3 (or BMD-4M used by Russian airborne troops), then we would be contending with a 100mm gun (with tube-launched anti-tank missile) and a coaxial 30mm gun – plus 7.62mm machine guns.  Russian main battle tanks, such as the mainstream T-72B3 have a 125mm gun, plus an integral ATGM, giving it a range of 3000m and 5000m respectively.  The Russian 125mm tank gun-launched 9M119 missile ‘Svir’ and 9M119M ‘Refleks’  are designated by NATO as the AT-11A and AT-11B ‘Sniper’ respectively.  Let us hope also that no Canadian/NATO vehicles come under the long-range stare of the Russian airborne’s (VDV) 125mm self-propelled anti-tank/assault gun in the form of the 2S25 ‘Sprut-SD’.

[4] For a detailed overview of the “Close Combat Vehicle (CCV)” debacle, see http://www.casr.ca/bg-army-close-combat-vehicle.htm   It is the author’s view that the German ‘Puma’ AIFV (w/30mm Gun) or the excellent Swedish ‘CV9030’ AIFV (used by some of our Nordic brothers) would make excellent choices.

[6] Past discussions surrounding integral air defence of Canadian ground forces usually assumes that the US would have air supremacy and that our ground-based air defence capability residing largely in a single air defence unit at division-level.  In the author’s considered opinion, this is a mistake – and one which would surely court disaster.  The air environment over the Baltic states (and western Russia) of any future conflict would likely be a hotly-contested one, resulting in only periodic ‘air superiority’ by NATO air forces.  We need modern air defence (AD) systems, deployed in both vehicle-born and man-portable configurations.

[7] Being integrated into the 82nd Airborne Division would not be difficult, as the ‘jump companies’ from all three Canadian Army regiments (PPCLI, RCR & R22eR) periodically jump/train with this formation. Failing this, the Canadian Airborne Battalion (‘1 Can Para’) could be placed under command of Britain’s own 16 Air Assault Bde, which itself lacks a third parachute battalion (beyond the current 2 & 3 Para Bn’s).  1 Para is currently under operational command of the UK Special Forces Support Group (SFSG).