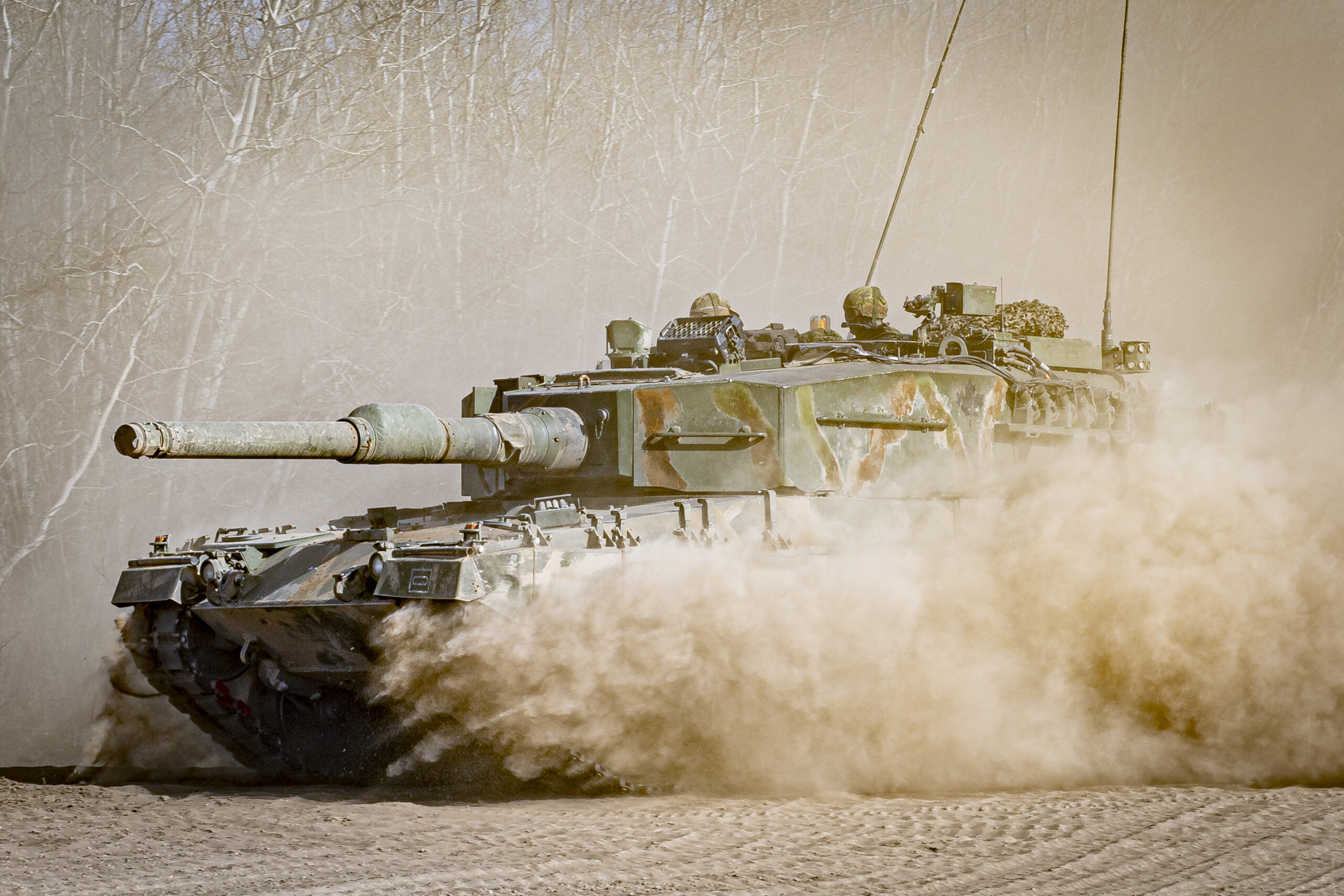 There is mounting pressure on Ukraine’s allies to provide main battle tanks. The next phase of the war will be a Spring Offensive for both the Russians and Ukrainians. Ukraine’s tank inventory is much like Russia’s – Soviet-styled armour that is designed to move quickly but has a low survivability rate when hit with Western munitions. Since the beginning of the war, we have seen Russian tank turrets being violently propelled into the sky after being hit.

Western tanks do not have this design flaw as munitions are separate from the main cabin. Western tanks are heavier due to thicker, effective armour and are more accurate than Soviet/Russian-designed tanks. If Ukraine can get their hands on modern Western tanks then they would be more effective in the field.

Ukraine pleaded for tanks and fighter aircraft months ago. However, there has been a hesitancy that if we over-equip Ukraine and give them more capabilities then Putin may counter with nuclear weapons in Ukraine or widen the war to NATO members. The UK provided Ukraine with 14 Challenger 2 tanks recently and there is a push from Finland and Poland to provide the Leopard 2 – if more allies join in. France added some extra pressure by stating that it would provide its own Leclerc battle tanks to any country to fulfil any capability gap, however, the Leclerc is no longer in production and this raises questions over spare parts and overall maintenance.

The logic behind providing the Leopard 2 to Ukraine is simple. It is one of the world’s leading main battle tanks and there is a lot of inventory of it among European allies. In fact, 13 European allies: Austria, Denmark, Finland, Germany, Greece, Hungary, Norway, Poland, Portugal, Spain, Sweden, Switzerland, and Turkey. Although essentially 12 as Switzerland will always believe itself to be neutral.

This means that Ukraine’s allies can provide more than one tank, which means better maintenance, training, logistics of spare parts etc. This would be in stark contrast to the mish-mash of artillery, infantry fighting vehicles and other equipment that we have provided to Ukraine.

As discussed in our previous article, the hesitancy is Germany’s as it has been before. Germany’s Social Democrats believe that sending tanks is one step closer to sending fighter jets and then NATO troops to Ukraine. Chancellor Scholz, a Social Democrat, echoes this statement frequently.

Finland stated that it will transfer some of its Leopard 2s if the EU okays the deal and that other European partners join in as Finland can only spare a limited number. Poland echoed a similar proposal, but now the Polish PM is signalling that Poland could transfer Leopard 2s to Ukraine without Germany’s export approval if part of a larger coalition – which is a legal hurdle as Germany needs to give the green light to the Leopard 2 transfer due to procurement contracts. It seems that Poland’s answer is simple: if a bunch of allies transfer the tanks, then Rheinmetall won’t produce spare parts and other tanks and lose out on future contracts? No, probably not.

However, it also has come to light that Germany won’t transfer any Leopard 2s until the United States transfers some of its Abrams tanks. The United States is hesitant of doing so for a number of reasons. One, of course, is what happens if Russia were to capture an Abrams tank. Russia could then dissect it for a technological boost in its own industry or exploit weaknesses in software or hardware or even pass the information to countries such as China. The second is more infuriating for the United States Army and has been a thorn in its side for decades. The Abrams tank is complex, and it is easier to buy a new one than to fix an old one or at least that is how Congress has perpetuated the complexities in order to keep production jobs. It got to the point that the US Army and Marines had close to 10,000 tanks in their inventories.

Between 2011 and 2014, the US Army pushed in Congressional hearings not to build more tanks and suspend upgrades. And in 2014, another $120 million was spent on new tanks.  The United States has been selling the Abrams – Australia, Egypt, Jordan, Morocco, Poland, Saudi Arabia, and Taiwan.

Canada has the Leopard 2, but why won’t they?

Canada has been supplying the Ukrainians with its own howitzers and other weapon systems including Roshel Armoured Personnel Carriers (APC). It was recently announced that Canada would supply an additional 200 additional new Roshel Senator APCs before the summer. The Roshel Senator APC has been utilized by Ukrainian forces since last February. This was announced before Canada’s Defence Minister, landed in Kyiv a couple of days ago. It was leaked that Ukraine would ask for some of Canada’s Leopard 2 tanks.

Canada’s Leopard 2 acquisition is a tad convoluted. Canada bought 80 second-hand 2A4s from the Netherlands, borrowed some newer A6s from Germany and then purchased an additional 20 2A6s from the Netherlands that would be then converted to German specifications and sent back to Germany. In fact, Canada has 82 tanks spread across three variants of the Leopard 2s – A4, A4M and the A6M.

This was to replace the Leopard 1A3s that Canada procured in 1979. Canada, of course, Canadianized them and had issues with the targeting systems. And by the time, they were deployed in Afghanistan, the bottom of the armour of the tank was worn down and was even more susceptible to IEDs.

However, Canada cannot and will not commit to sending tanks to Ukraine because of the issue that has plagued the Canadian Armed Forces for over a century – procurement. So, when Canada replaced its Leopard 1s with 2s. There was no study about the additional upgrades. It was assumed that the mine ploughs, mine rollers and bulldozing blades from the Leopard 1 inventory would be compatible with the Leopard 2s.[1]  Canada’s Auditor General quickly found that no one on the file did their homework and just made assumptions. Canada has a horrible history of procurement. Recently, Canadian sailors on the new Arctic Offshore Patrol Vessels have been issued water bottles due to lead contamination in the pipes. Moreover, the repairs to the HMCS Harry DeWolf will be paid by the Canadian taxpayer as there was only a one-year warranty. It also has had issues with its main diesel generators. The replacement of the over 50-year-old Twin Otter fleet has been put on hold. Canada’s future Canadian Surface Combatant fleet was originally  $26 billion and now spiralled to an estimated $84.5 billion. And that is only a glimpse of what has happened only over the past few months.

Let us assume that Canada hands over 14 Leopard 2s, which is a company. Then, Canada only has 68 tanks and the mission-capable rate of main battle tanks is horrendous. Somewhere around 33%, which would then mean Canada would have approximately: 27 in disrepair for spare parts, 27 in repair, and then only 13 for actual use. And this would also be assuming that Canada could readily get spare parts from Rheinmetall and Germany…after Canada disregarded the export license that German agreed to with Canada. Canada would then also join the queue for Leopard 2s from Rheinmetall with the other allies that provided the tanks to Ukraine. This is because we would not be able to take away capabilities from the Ukrainians after the conflict was over. And if Canada were to buy new, it would mean that the Canadian Army would have to take inventory of the Leopard 2A7 or 2A7+ variants, which would vary from Canada’s existing inventory. And would then also cause some logistical, maintenance and procurement debacle as Canada cannot really procure anything easily and without controversy. Canada would also risk the potentiality of a German market for its liquified natural gas (LNG).

Germany will have to recuperate from primarily relying on Russian for its natural gas supplies. And going against Berlin on something so foreign policy, and economically,  sensitive is probably the final nail on Canadian Leopard 2s to Ukraine.

There have been discussions as to why Canada can easily procure new systems for Ukraine – but not for itself. The answer is simple. For Canada, it is easier to buy something for others than it is for yourself.

[1] Office of the Auditor General, “Chapter 5: Acquiring Vehicles for Use in Afghanistan,” p. 10.