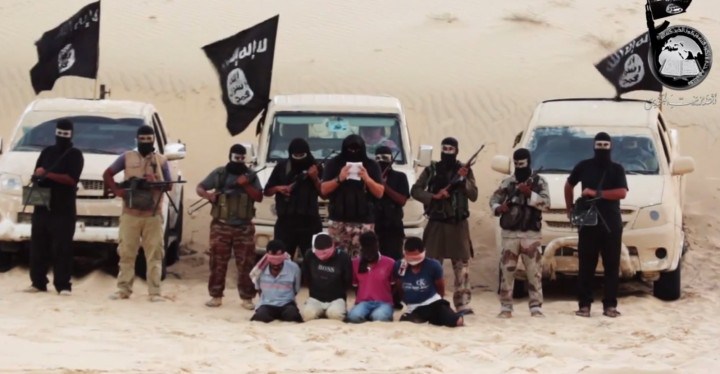 Videos of executions broadcasted in gruesome detail is nothing new for the Islamic State of Iraq and al-Sham (ISIS). In late July, a 22-minute video was released that depicted the massacre that occurred at a military base near Tikrit. It is estimated that 1,700 Iraqi servicemen were slaughtered at that military base. The video in itself utilises new and older footage. The video is not ground-breaking, but there is something about the release of the video that is.

The fact of the matter is that video should have been banned. ISIS’s leader, Abu Bakr al-Baghdadi, banned the filming and release of such execution videos in mid-July. Al-Baghdadi justified his decision by stating that these videos were isolating themselves from the global Muslim community.

Banning the videos remains a controversial decision as some support al-Baghdadi in his decision, while others believe that the videos intimidate, and provide warning to, their enemies. This does provide an example of where the ISIS leadership and the group think of jihadist fighters differ.

It should also be noted that Baghdadi did not ban the actual acts of barbarism that he now sees as a threat that would erode Muslim support. Clerics around the globe have condemned the actions of al-Baghdadi and ISIS. However, images and videos are still widely being produced.

For example, on 3 August, it was revealed that a new child executioner was recruited.

Unfortunately, Twitter and social media are still a washed with pictures depicting child soldiers, executions and various gruesome and heinous acts. The infamous Jihadi John is now on the US’s drone strike hitlist, and that in itself is a badge of notoriety.  However, if the putative wedge between ISIS leadership and extremist foot soldier widen then extremist fighters and social media personalities will move onto the next insurgency abroad. A potential migration, of course, would be the North Caucasus, Libya and Egypt. An ISIS affiliate in Egypt, threatened to execute a Croatian hostage is an indication that the global ISIS franchises will continue its tradition.

Other stresses and strains

Of course, the revelation that there is differences over media production and distribution is not the only factor in this. Local news also reported in early July that 13 top commanders of ISIS were executed after a failed coup plot against al-Baghdadi. The reasoning for the coup was never explained, but it would be justifiable to assume that ISIS is having difficulties within its territories. Extortion and internal taxation has been lucrative and one of the main sources of income. Also, ISIS has been able to replace the thousands of fighters it has lost through the recruitment of the population under its control.

Another pressing issue, of course, is the governance of its territories, which is now estimated to be 82,940 km2. ISIS is still an insurgent organisation that has had to learn how to govern its territories, which has proven to be brutal. However, this moves beyond imposing a strict interpretation of Sharia Law, but delves into ensuring that there is a distribution of food, electricity and to ensure that a semblance normality continues to quell any uprisings.  ISIS has experienced a territorial loss of 9.4% since January 2015. Iraqi and Syrian government forces have not been as successful as various militias.

ISIS has also strayed from its normal operations in Iraq with the car-bombing during the eve of the Eid al-Fitr holiday which marks the end of Ramadan. This attack claimed the lives of over 90 people and injuring more than 120. The use of vehicle-borne improvised explosive devices (VBIED) is not new, especially for ISIS. However, the targeting of them is. Before VBIEDs were limited to Syria and then targeted enemy positions – Syrian government and al-Nusra positions. The use of VBIEDs has increased in Iraq. Since January, 267 were used in Iraq and 101 in Syria, but again the majority were used against government or militia forces.

July may have marked the beginning of ISIS splitting. Al-Baghdadi has definitely lost control over ISIS’ social media army. Its tactics are beginning to change and showing signs that it will target civilians of a different religious sects and has not been on the offensive as much.

The main concern from all of this is that if ISIS is beginning to feel internal rifts than stars like Jihadi John will move onto the next insurgency and their brutal acts will migrate to another theatre. The coalition in Iraq can not stop the migration of insurgents from accessing Syria and from there moving elsewhere. The isolation of ISIS is a top priority to ensure that militants like Jihadi John will not transcend to the next threatre.

In all, a putative failed coup attempt and the execution of its top commanders demonstrates that ISIS is losing its leadership capacity. This will make it a more brutal and opportunistic wounded beast that will not be easy to predict. Our advances may be quicker in the short term, but lingering violence will escalate. Many have criticized that the advance is not going as quickly as it should, but caution is needed if cracks are developing within ISIS.