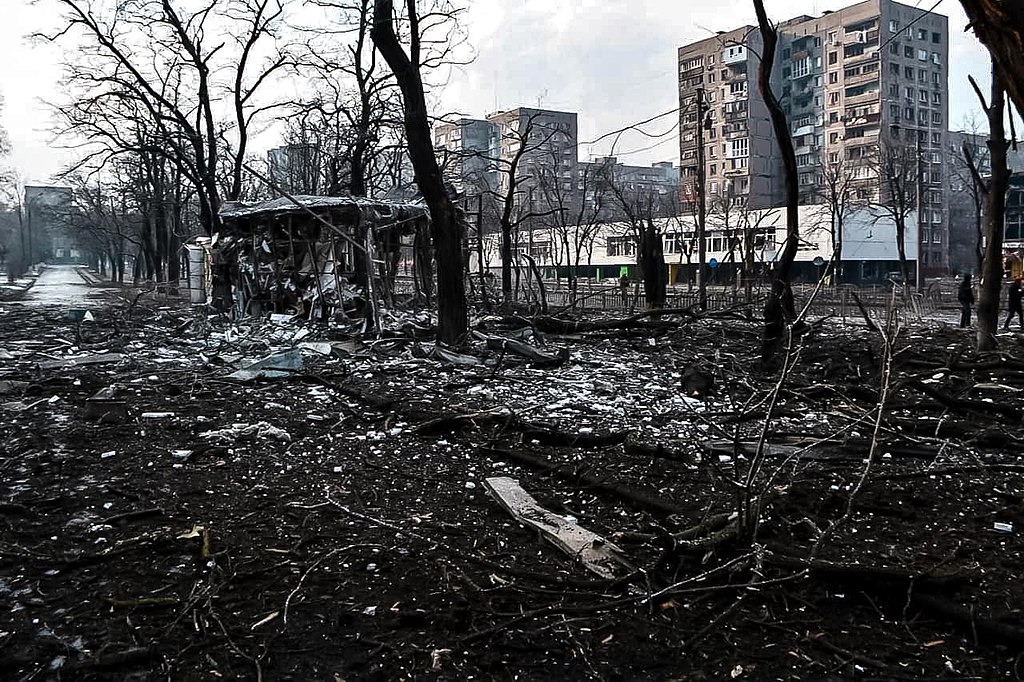 The Russian invasion of Ukraine is entering its fourth month. Ukrainian President Zelenskky told the Davos 2022 World Economic Forum that Ukraine suffered a loss of more than $500 billion and that entire industries and cities will have to be rebuilt from the ground up. Zelenskyy announced Ukraine24, a direct way ordinary people can donate to Ukraine.

Russia is increasingly being accused of scorched earth tactics with indiscriminate artillery, missile and bomb strikes. There are multiple reports of Russia forcibly moving Ukrainian civilians into Russian territory; the Ukrainian government believes they will be used as hostages. Ukraine estimates that 402,000 people, including 84,000 children, have been taken.

There are also reports of Russia loading Ukraine’s grain supply onto Russian bulk carrier ships. Egypt is warning that the Russian-Ukraine war could result in a million deaths globally due to the wheat shortage. Most of Ukraine’s wheat and grain supplies went to the Middle East and Africa and Egypt alone as 300,000 tonnes of wheat that is stranded in Ukraine that it already bought.

There are also indications that the Russians are mining Ukrainian farmland. Open Intelligence Sources are showing pictures of tractor wreckages and in some instances of the unexploded ordinance nearby. This means that there will have to be a concentrated demining effort in order to ensure that Ukraine’s agricultural land is safe for industrial farming. As Polish Prime Minister Morawiecki observed, “Putin is weaponizing Ukraine’s crops.”

The global shortage of grain and wheat means that millions will starve and in turn another migrant push from the Middle East and Africa into Europe. Moreover, the destabilization of a global famine, and markedly increased inflation, will have on local conflicts in those regions. Soon another conflict will flare up in Africa or the Middle East and regional and international efforts will be needed to end it.

As Western countries continue to send military, economic and humanitarian aid to Ukraine, the looming question is who will pay for it. Ultimately, it will be the taxpayer. However, there are murmurs suggesting that Russia should pay reparations for the war as we have been funnelling billions of dollars into Ukraine’s survival.

Chernihiv Oblast, another Ukrainian tractor hit a mine while working. An additional unexploded TM-62M anti vehicle mine was recovered at the scene. pic.twitter.com/K1ThinfjnL

Reparations would be difficult to implement on the Russian government, especially with Putin still in power. Of course, the wider issue is that of the history of reparations. They have taught us that they can create instability in the country they target. When Carthage lost the first Punic War, Rome imposed reparations. Carthage had to surrender any islands between Italy and Africa. Rome demanded that all Roman prisoners would be released freely, while Carthaginians would still have to pay a ransom. A further, and more punishing, economic reparation was imposed – 2,200 Euboean talents of silver over 20 years and 1,000 talents immediately, or approximately 82,000 kilograms of silver in total. The humiliation of the Treaty of Lutatius brought the rise of Hannibal Barca to Carthage and the Second Punic War.

After the First World War, the Weimar Republic was crippled by the reparations that it owed under the Treaty of Versailles. Like Carthage, it was seen as a national humiliation. The British Economist, John Maynard Keynes, referred to it as a Carthaginian Peace. The crippling blow of the reparations and the economic depression led to the rise of Adolf Hitler and Nazism. (Interesting side note, Germany made its last reparation payment in 2010)

Imposing reparations on Russia sounds like a good idea, but we know that will never happen under President Putin. If by some chance he is deposed, imposing reparations runs the risk of another nationalist figure to rise up and assert control because of the humiliation we decreed on Russia. There has to be some balance. But can that happen?

After the First Gulf War, the UN Security Council was able to pass Resolution 687 “to pay compensation for claims” for losses, damage, and injury to foreign governments, individuals and corporations “as a result of Iraq’s unlawful invasion and occupation of Kuwait.” Obviously, a measure like this will not be able to pass in this case with Russia having a veto. There are opportunities to seek reparations under the International Criminal Court or the International Justice Court, but Russia could seek to isolate itself from the world until peace can be negotiated for it to come back into the fold. And the West continues to attempt to isolate Russia with debt servicing and asking countries not to deal with Russia. However, still, India, China, countries in Africa etc, continue to do so. And as international companies ceased sending their oil tankers to Russia, Russia commissioned its own oil tankers after international insurers ceased covering the vessels. Not only sending oil that the West wants to stop but in vessels that may pose some level of environmental calamity.

And To Pay Whom?

The West stepped up and provided “loans” to Ukraine. Canada provided loans through the International Monetary Fund.  If there were reparations, Ukraine would just send those to the loans and the Lend-Lease agreement with the US. Ukraine will need to rebuild its towns, cities, industries and its own national self-worth. Someone needs to pay for Ukraine’s re-establishment in the world. International investment can only go so far, and of course, the main question for investors – can Ukraine afford to help subsidized reconstruction with the weight of international loans?  We may not be able to get Russia to do it outright, especially with Putin in power. But we cannot expect a country that has fought off Russia so far with nothing, but equipment and some training provided by NATO and EU countries.

There have been concerns about Russia increasing its efforts in Moldova, the Baltic and Balkan states. We owe a lot to Ukraine. They have toed the line. We cannot expect reconstruction to be funded through international crowd-sourcing like Ukraine24. But it can’t hurt to try.

**If you are interested in helping Ukraine financially. There are many avenues. Ukraine24 is one of them. However, there are a multitude of NGOs, IGOs and Ukrainian initiatives operating in Ukraine – one of our readers provided this link.