The Balkans: The Next Domino After Ukraine. 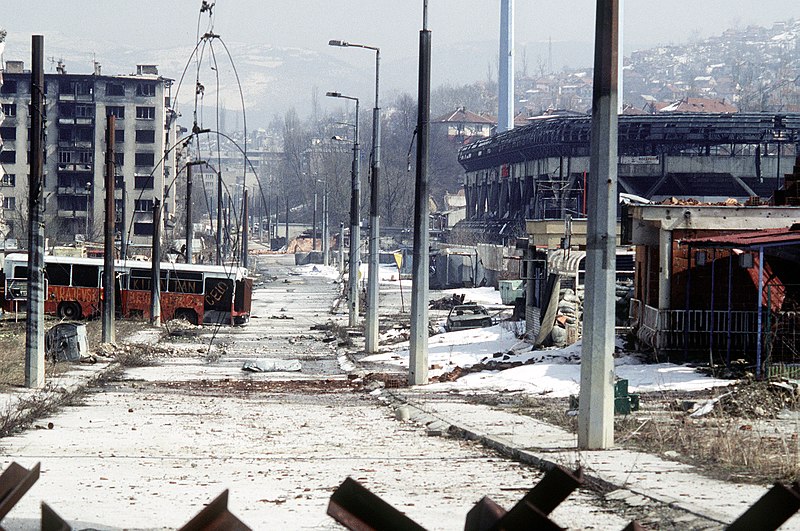 Last week DefRep reported in the opening days of Russia’s appalling assault on Ukraine that as part of Putin’s attempt to upend the international order Moscow has sent Nikolai Patrushev, the secretary of the Kremlin’s Security Council to Serbia. In the following days, it proved that perhaps the Kremlin had been overly ambitious and optimistic. These moves looked premature as their assault on Ukraine failed to score the quick and decisive victory they misguidedly seemed to think was possible.

Regardless of Russian assessments in Ukraine, Patrushev’s visit emphasizes Moscow’s inclination towards escalating tensions in the Balkans where the Russians are protesting the involvement of Albanian, Kosovar and Bosnian mercenaries in Ukraine. Although as yet unproven this will likely prove to be a self-fulfilling prophecy given the creation of the Ukrainian Foreign Legion. Croatian volunteers are already heading to Ukraine to fight as part of the newly formed Ukrainian Foreign Legion. An act that has been applauded by Prime Minister Andrej Plenkovic

Resulting from Russia’s miscalculation and the mounting Western response Serbian President Vucic now finds himself in a difficult position as immense pressure mounts from the EU to ‘pick a side.’ So far it seems Vucic remains firmly in Moscow’s camp refusing to issue sanctions. However, a crack in the façade is appearing with Vucic announcing that Serbia was joining a United Nations General Assembly condemnation of Russia’s attack on Ukraine, taking the position that Serbia supports Ukraine’s sovereignty but opposes sanctions against Russia.

Geopolitical and economic issues make the Balkans a region particularly sensitive to repercussions from the ongoing conflict in Ukraine. Kosovar President Vjosa Osmani’s media advisor, Bekim Kupina, speaking to Prishtina Insight argued the crisis in Ukraine poses the threat of destabilizing the delicate peace in the Balkans expressing the belief that Russia’s political and military cooperation with Serbia is used by both to advance ‘the hegemonic aims of both countries.’ Kupina went on to state that Patrushev’s visit “prove[s] that the future target of Russia and Serbia is the destabilization of the Western Balkans.”

The Biggest risk posed by the Russian agenda is in Bosnia and Herzegovina where the autonomous Serbian Republika Srpska has clear intentions of seceding. Milorad Dodik, who serves as leader of Republika Srpska has been threatening to do so for years. This agenda has recently been advanced by the creation of parallel Srpska agencies in Banja Luka to those in Sarajevo. In addition, in December the Republika Srpska Parliament approved a law, which sanctioned its withdrawal from the larger Bosnian Judicial, tax, and military administration. The deadline for completing this is June. The implications of this are clear enough, a separate parallel state is all but a fait accompli at this point.

Inversely, on the Croatian side of Bosnian ethnic tensions as recently as 19 February the Croatian National Assembly (HNS), which represents most Bosnian-Croat political parties, threatened legal procedures with the aim of creating its own entity within Bosnia unless electoral laws are amended to increase Croats’ presence in national institutions. The Croats are now threatening to boycott the general election in October which would ignite a Bosnian constitutional crisis.

Bosnia already risks disintegration without Russian meddling and this powder-keg is directly tied to both ethnic and religious divides as well as a political one which includes, if not centres, on a fault line over attitudes towards Russia and NATO. Any chaos in Bosnia would involve multiple NATO states on its borders and at least one Russian backed state. Indeed given Patrushev’s visit with Vucic, this might very well be Moscow’s plan. The EU has already announced it will be doubling the size of its peacekeeping force in Bosnia over the next two weeks, a worrying sign. It is also entirely symbolic and nowhere near large enough, now numbering 1,100, to prevent unrest.

It is worth noting that the Russians have already made painfully clear their attitude towards Bosnia when last year the embassy issued a warning to Sarajevo that should Bosnia take steps towards joining NATO, Moscow would consider this a hostile act and respond in kind.

In Serbia an election is scheduled in one month’s time and with the hard pro-Moscow/Beijing and anti-West line Vucic has taken, one is left to wonder what sort of upheaval may be in store for Belgrade. The mood in Serbia is clear enough with a 2021 survey by the Institute for European Affairs in Belgrade claiming 83% of Serbs view Russia as a “friendly” country. In this light Vucic’s line makes sense. However, one is left to wonder how this electoral calculus might evolve with the pressure of Ukrainian refugees pleading for safe haven from their Slav brethren. When the Serbian people confront the reality of Putin’s actions face-to-face there are reasonable grounds to suspect the average Serb on the street may decide to make a radical reappraisal of their politics.

Although this will very much depend on how events evolve in Ukraine, it is worth noting that other Balkan neighbours are already making strives to aid in the relocation of Ukrainian refugees. As the situation escalates Serbia could see its neighbours who are NATO members become more deeply involved is the increasingly demanded military action such as the imposition of a no-fly zone. Whether this is likely to happen or not, Serbia finds itself suddenly very much alone having backed the wrong horse. Despite this Vucic is doubling down as a major political tenet that looks to have proven a profound miscalculation.

In terms of Serbia’s neighbours, Kosovo, has already requested a permanent NATO base be established in Kosovo and has called for the start of an accelerated accession process, much to the chagrin of Vucic and Putin. Kosovo’s Defence Minister, Armend Mehaj said Sunday: “Accelerating Kosovo’s membership in NATO and having a permanent base of American forces is an immediate need to guarantee peace, security and stability in the Western Balkans.” Kosovo has shown itself acutely aware of the danger Putin now poses with MP’s in the Assembly calling Ukraine “the first front” of a wider conflict. Enver Hoxhaj, an MP from the Democratic Party of Kosovo put it as such “Ukraine is the first front, the Balkans is the second front and we are the first line of this second front in the Balkans, and the government should convene the National Security Council.”

The instability in the Balkans is already becoming apparent. In Montenegro, which has been marred by political upheaval in recent years, Serb nationalists have taken to the streets to rally in support of Russia. Their message is concerning in the way it has been tied to their shared Orthodox faith which they praise Putin as the Guardian of. This however also holds a domestic dimension and is connected to the planned formation of a minority government backed by the Democratic Party of Socialists (DPS), deeply disliked by the pro-Russian ‘Democratic Front’ which until recently formed part of Montenegro’s ruling coalition. This coalition collapsed after Deputy Prime Minister Dritan Abazovic filed a no-confidence motion against his own government, which was backed by the DPS. The Democratic Front it should be noted was alleged to have been involved in the attempted coup of 2016 that was tied to the Russian Secret Service. Additionally, this divide between Serb and Adriatic Montenegrins lines up in ethnic terms but also in terms of attitudes towards Russian and NATO.

While Montenegro remains divided Russian oligarchs are fleeing with their yachts to Montenegrin shores knowing Montenegro has traditionally been a safe haven for hiding assets that may be subject to judicial procedures or international sanctions. Montenegro has closed its airspace to Russian planes but has so far made no statements about its ports. In the coming days there will no doubt be growing international pressure brought to bear on the already fragile government in Podgorica to take action. North Macedonia, Kosovo and Albania have meanwhile joined the EU and US sanctions on Russia.

With Moscow demanding security guarantees from both Sweden and Finland as well as the recent Belarusian gaff of revealing a map that suggested Transnistria and Moldova are already Russian targets it seems difficult to understand why this still needs repeating but one cannot understate the following…What is happening in Ukraine is not occurring in a vacuum, it has wide-reaching implications and if not addressed quickly it will pull the region down with it

Whether we like it or not this is the reality. Preventing further injury requires an immediate and overwhelming response from the West, which in one unified voice speaks directly to those who wish to upset the international order. This message will require speaking with the voice of the military. To be direct, military action on the part of the West is immediately required or our best hope will be a palace coup to avoid total chaos on a European or perhaps even global scale.

DefenceReport’s Analysis is a multi-format blog that is based on opinions, insights and dedicated research from DefRep editorial staff and writers. The analysis expressed here are the author’s own and are not necessarily reflective of any institutions or organisations which the author may be associated with. In addition, they are separate from DefRep reports, which are based on independent and objective reporting.