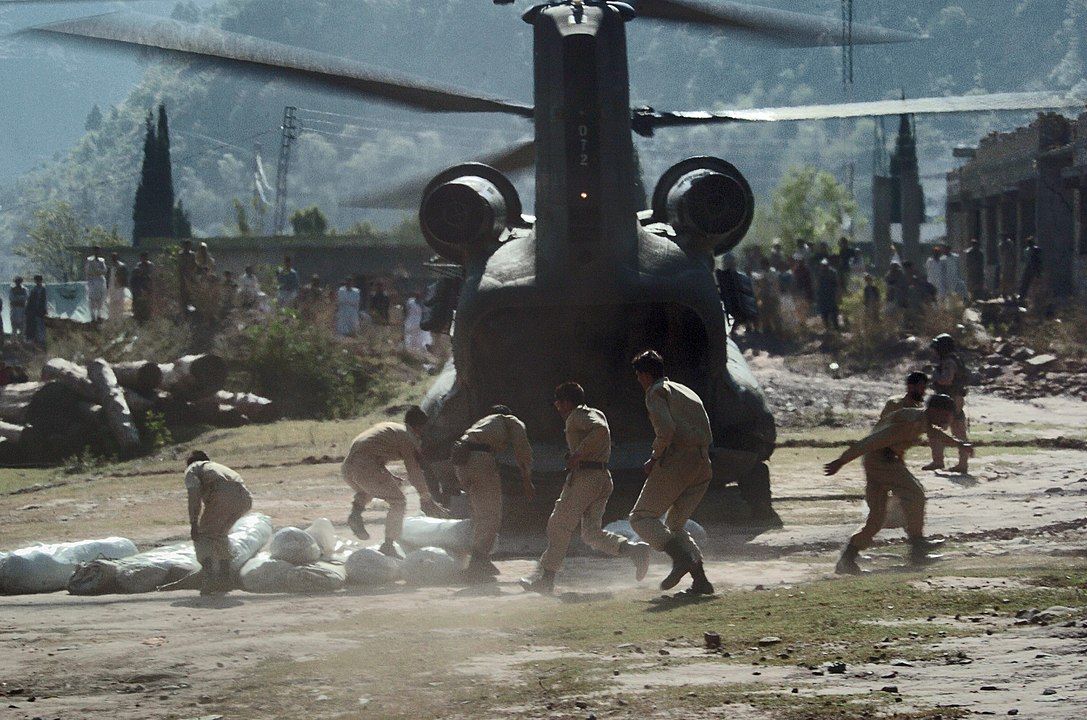 The earthquake in Afghanistan’s Khost and Paktika provinces. It is estimated that the earthquake killed more than 1,000 Afghans, injuring close to 3,000 and damaging 4,500 homes. Not only prompting a massive humanitarian relief effort but also prompting a reconstruction effort to house the displaced before the winter.

The Taliban has appealed for international aid. There are local Pakistani communities attempting to raise money for the victims, such as those in Calgary, Canada. The UN is coordinating its own relief efforts with its UNICEF and UNHCR departments. The World Food Programme is coordinating its own food and logistics efforts. This earthquake comes after a cataclysmic winter that has left millions of Afghans to go hungry. It is unknown how many Afghans died during the winter, but as severe famine and cases of Afghan families selling their offspring to afford food for a few months.

The Taliban face a considerable legitimacy crisis and the current situation in Khost and Paktika provinces will not help.

Since the Taliban’s takeover of Afghanistan, they have been steadfast in their statements that no foreign terrorist group is active in the country with their approval. Even just a few weeks ago, the Long War Journal posted that the head of the Turkistan Islamic Party, Abdul Haq al Turkistani, celebrated Eid in Afghanistan.

India warned the UN Security Council that Lashkar-e-Taiba (LeT) and Jaish-e-Mohammed are active in Afghanistan. This should not be surprising as LeT was founded in Afghanistan after the Soviet retreat and has been active in the country supporting the Taliban.

It would be naive to think that terrorist groups will not help with the aid efforts. In fact, during the initial phase in Afghanistan, Pakistani groups such as LeT, Jaish-e-Mohammed (JeM) and al-Qaeda assisted in the relief efforts in the 2005 Kashmiri earthquake. LeT even opened a field hospital under Dr. Amir Aziz Khan who had links with al-Qaeda and Bin Laden and was subsequently arrested in 2002.[1] Pakistani President Musharraf told the Financial Times that “Since [the jihadis] are there, certainly we would not like them to stop. Why should we not allow our own people who are going there and assisting…whether they are jihadis or anybody?”[2] The 2005 earthquake was a humanitarian assistance battle between NATO and jihadists. NATO poured in as much support as it could to assist with relief efforts while attempting to curtail jihadist efforts, which has placid support from the Pakistani government. Taliban will not be as open about it as Musharraf was as they still support al-Qaeda and other groups in Afghanistan and they do not have to at all.

Lashkar-e-Taiba not only assisted in the 2005 Kashmiri earthquake relief efforts but also in the 2010 and 2014 floods in Kashmir. Its charitable wing, Jamaat-ud-Dawa (JuD), runs schools, hospitals and other social enterprises in Pakistan. Its leader, Hafiz Mohammed Saeed, has recently been sentenced to 31 years in a Pakistani jail after being linked to terrorist financing. It should also be noted that Saeed claimed that India is conducting water terrorism and that those floods were caused by India. These provocations have had an impact on the Pakistani/Kashmiri people. With LeT having a presence in Afghanistan since the 1990s, this disaster will bolster their numbers. There are reports that both LeT and JeM have set up training camps in Afghanistan once again. Although JeM has a history of operating training camps in Afghanistan, LeT has its 1986 foundations set in Afghanistan. After the Soviet withdrawal, Pakistani Inter-Services Intelligence (ISI) attempted to wrangle the mujahideen into joining the Pakistani cause for the liberation of Kashmir from India and creating a proxy war.

With the sentencing of Saeed, LeT and JuD will be looking for a backup territory if the situation in Pakistan turns out for the worst. Going back to its Afghan roots is an option. However, it should be noted that JuD has been running Islamic schools (madrassas) that do teach English and science, clinics and other social aids within Pakistan.

LeT/Jud has been nefarious in moving into areas that the Pakistani government has been unable to provide. It found an opportunity to gain prominence through relief efforts in Kashmir. Moreover, it has continued to operate in Afghanistan. It is likely that LeT/JuD will continue these efforts in Afghanistan as it has a base in the country.

If LeT is concentrating its efforts in Afghanistan, it may indicate that the group is aligning with more global al-Qaeda movement or shoring up its influence in Afghanistan to assist with the Taliban’s efforts against ISIS-K for support for LeT’s aspirations in Kashmir. Regardless, the takeaway is that Pakistan groups like LeT are active in Afghanistan, and their relief efforts in the 2005 earthquake and the 2010 and 2014 floods, will shift to the current crisis in Afghanistan. However, at the same time, those groups will take advantage of it by currying favour with the local populace as they did in Kashmir – for funding, recruitment or logistical support.

What will come next is something to keep an eye on. But with LeT and JeM operating in Afghanistan, a wider Kashmir campaign may be in the cards or with the Taliban safe-haven, LeT may find a strengthened relationship with al-Qaeda.