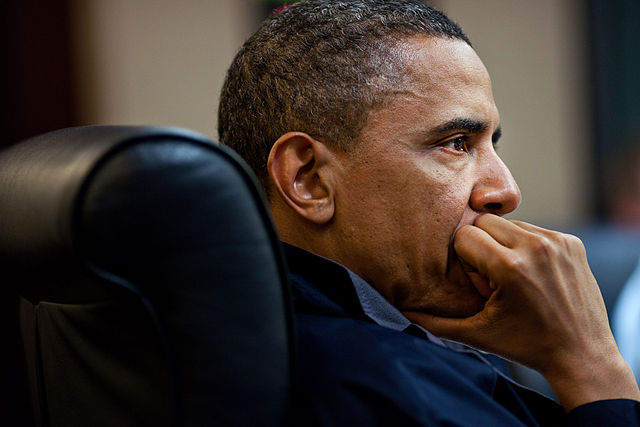 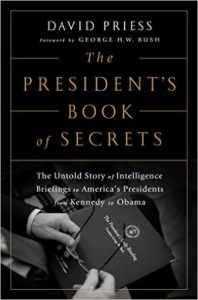 Prior to the September 11, 2001 terrorist attacks against the U.S., the Presidential Daily Brief (PDB), also known as “the book,” was a relatively unknown, at least in public circles, product of the Central Intelligence Agency (CIA). However, the investigation into the 9/11 attacks brought about greater public awareness and scrutiny of the PDB. More recently, the PDB has re-emerged in the limelight with questions over how the new U.S. President Trump would use this resource and due to a recent announcement of the placement of over 12 million pages of declassified CIA documents onto an online search tool. In this regard, David Priess’ The President’s Book of Secrets: The Untold Story of Intelligence Briefings to America’s Presidents from Kennedy to Obama is a relevant and well-written account of the PDB’s origins and how each successive U.S. Presidential administration since Lyndon Baines Johnson (LBJ) has used it.

In order to carry out this history, Priess, a former CIA officer and PDB briefer himself, conducted over 100 interviews of all living PDB consumers—Presidents and Vice Presidents—briefers, and other national security professionals. Former President George H.W. Bush wrote the forward, providing a useful insight from not only a former “First Customer” but also a former CIA Director. Given the highly classified content of the PDB, no classified information is contained in the book. Thus, the book is about the PDB itself—including a detailed examination of its precursors prior to its inception in 1964—and the inner workings and personalities of the key figures in each White House’s national security structure over the past 50+ years.

Before the PDB, according to Priess, the U.S. lacked a legitimate, independent intelligence analysis capability. However, the Japanese attack on Pearl Harbor in 1941, coupled with Nazi Germany’s rise in Europe, necessitated the creation of one. President Franklin Delano Roosevelt (FDR) established the U.S.’ first foreign intelligence service in 1941—the Office of the Coordinator of Information (OCI)—a precursor to the Office of Strategic Services (OSS), created in 1942. By 1947, with the passage of the National Security Act, the OSS had morphed into the CIA. However, prior to the CIA’s creation, the OSS had its own analytic unit, composed of leading U.S. scholars who were unfortunately overly focused on long form, academic analyses rather than prioritizing analysis of near-term security threats. Thus, after FDR’s passing and with President Truman at the helm, the Central Intelligence Group (CIG) was created which produced the first daily analytic piece—“the Daily Summary”—for the President. First issued in 1946, the Summary underwent a number of format changes and due to the general lack of analysis contained within it, the Summary was subsequently discarded and replaced with the “Current Intelligence Bulletin” (CIB) in 1951. The CIB was then replaced with a new product, the “Central Intelligence Bulletin” (a new CIB).

What is the PDB? According to Priess, the PDB contains the “most sensitive intelligence reporting and analysis in the world.” It is produced each working morning, 5-6 days per week, and personally delivered and briefed on by CIA officers.  As such, the PDB’s purpose is to “provide accurate, timely, and objective information from classified and unclassified sources” to help the President protect the U.S. (p.xii). Its contents include a synthesis of key information from clandestine sources (human intelligence—HUMINT, signals intelligence—SIGINT, measurement and signature intelligence—MASINT) and open source materials (OSINT) that are compiled into a document that is usually no more than a single page in length. Historically, the PDB was printed onto paper but starting with President Obama it has been uploaded into a Top Secret iPad. Additionally, Priess emphasizes—one of the most important points of his book—that the PDB is tailored to meet the specific needs and preferences of each President as the “First Customer.” In this regard, Priess notes that “the most fascinating issues about the PDB do not involve the exact substance of its articles but, instead, revolve around the personalities of its producers and its readers, the process of its creation and delivery, and the place it holds in the daily work of national security at the highest level.” Thus, Priess rightly claims that the effectiveness of the PDB depends upon “each President’s personality, the international environment at the time, and that administration’s particular national security decision-making process.”

The strengths of the book are numerous. First, Priess was able to interview all living consumers of the PDB since its creation and glean the intricacies of how it was and wasn’t used, each President’s personal style and preferences, and insights into the inner workings of the national security establishment of each administration. In this sense, there is really no other book like it. It’s essential reading for intelligence and other national security professionals alike. Second, he raises a number of key issues, several of which have broader national security implications, associated with the PDB:

Third, Priess offers valuable insights into the preferences and styles of each President since Eisenhower with regard to the PDB or its various precursors as well as into the inner workings of each White House national security team since then. For instance, President Eisenhower placed less emphasis on the CIB, instead preferring structured briefings at the National Security Council (NSC) level which thus opened up the CIB’s distribution to a broader audience of 33 in 1954 to 48 copies by 1957. By contrast, President Kennedy relied more heavily on the CIB and its distribution was more limited. The Bay of Pigs fiasco in 1961 changed Kennedy’s way of dealing with foreign policy, leading to the creation of the “President’s Intelligence Checklist” (PICL). Jokingly referred to as the “pickle,” it was user-friendly and served Kennedy’s preferences—it was short, could be folded and carried in his pocket, and included maps. When LBJ assumed power, following Kennedy’s assassination, he didn’t find the PICL useful initially so the CIA reformatted it to suit his needs. On December 1, 1964, the first PDB, built on the PICL, but with shorter items and in a simpler format, was issued. LBJ loved it—by 1966, it was being delivered 7 days a week. LBJ was especially interested in reporting on Vietnam and Soviet intentions in Europe and enjoyed reading it at night so the timing of its production was changed. President Clinton didn’t always like the PDB, sometimes relying more on the U.S. State Department’s Intelligence and Research (INR) Bureau analytical products and briefings instead. By contrast, President George W. Bush ushered in what was then considered the “PDB’s Golden Age” with his active engagement and insistence that a PDB briefer join him to conduct the daily briefing on all domestic and international travel. Bush narrowed the distribution list which had previously been expanded under Clinton. Speaking of the Bush era, Priess offers a refreshing account of the infamous PDB items, and subsequent controversy surrounding them, on Osama Bin Ladin leading up to the 9/11 attacks. He notes that over an eight-month span in 2001, just prior to the attacks, over 40 PDB pieces were produced related to Bin Laden. However, as Priess points out, the focus of these pieces was mostly on intent rather than on capability, which led to a major failure to properly respond to apparent warnings. After the attacks, Bush spent even more time on intelligence briefings and a new document—the “Threat Matrix”—was created to track terrorist threats. This matrix ended up taking more of the President’s time than the PDB. Lastly, President Obama held frequent but irregular briefings and eventually had the PDB delivered on an iPad—the last printed version was on February 15, 2014. Obama preferred to read the PDB on his own, wanted broader distribution, and requested a new product—the daily “Economic Intelligence Brief” (EIB)—be created given the global economic situation inherited upon his assuming office. Obama received some criticism in the press as it was rumored that he attended less than 40% of his PDB briefings after his first two years. In addition to the PDB and EIB, the White House held a weekly “Terrorism Tuesdays” discussion and the National Center for Counter-Terrorism eventually created another product for the President—the National Terrorism Bulletin (NTB).

In closing, as Priess contends, the PDB is “here to stay” even if it continually undergoes a variety of style and substance changes to match a President’s particular preferences. As mentioned, this book is highly recommended for national security professionals given the insights it provides into how personalities impact the flow and dissemination of information in the White House, and how the PDB and similar tools are critical to providing Presidents with an opportunity to get ahead of a national security issue before it fully unfolds.

The book can be found here at Public Affairs.