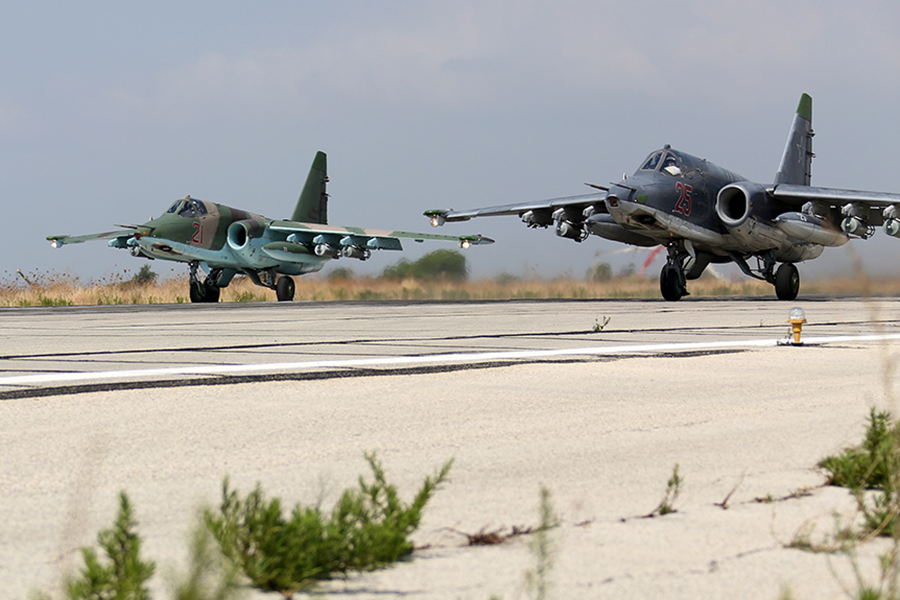 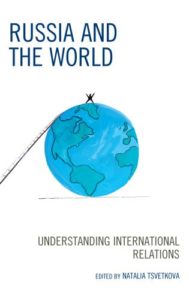 Russia and the World: Understanding International Relations, edited by Natalia Tsvetkova, is an accessible volume of essays by scholars from St. Petersburg State University in Russia. The volume, written for postgraduate students, offers Russian perspectives on a range of theoretical and practical topics in international relations (IR). Given the current controversies surrounding Russia’s role in Ukraine and Syria, and its interference in the 2016 U.S. Presidential election, the book has been published at an opportune time. While the authors offer solid analyses of traditional and contemporary IR theories and methodologies, and Russia’s role with regard to key policy debates in global affairs, at various points throughout the book an inherent bias toward official Russian Federation thinking is revealed. As such, the collection lacks sufficient critical analysis of Russian views as compared with Western ones.

The book is organized into three main sections: a) theories, concepts, and methodologies within IR theory to include reviews of major thought traditions, geopolitical and geostrategic approaches, origins of the contemporary international system; b) global issues and challenges related to international political economy (IPE), international conflicts and conflict management, arms control, international organizations (global and regional), rise of non-state actors, environmental issues, soft power and public diplomacy; and c) Russian statecraft and foreign policy including the evolution of the Russian state and economy since the USSR’s collapse, the role of regional economic blocs, Russia’s interests in the Arctic, EU-Russia relations, and U.S.-Russia relations.

The authors’ overarching argument is that Western studies of Russia have significantly, and unfortunately, declined since the end of the USSR but that the region is too important to ignore. In their view, Western scholars and theories have traditionally dominated the literature and discourse on Russia and that such discourse has been unfairly “critical” of Russia’s role. Thus, the authors seek to provide a “balanced” picture of IR and Russia. The authors claim at the outset that Russia is “the” primary actor in global politics and that Russian foreign policy and domestic development is generally misrepresented within Western circles.

In order to justify their arguments, the individual chapters offer a broad range of research related to Russia’s role in the world. For example, Irina Zeleneva’s chapter on geopolitics and geostrategy describes how, in her view, Russia is its own “core area” (i.e., the “Heartland” of Eurasia) geographically and it is surrounded by five rival core areas led by Sweden, Poland, Turkey, Iran, and China. Given this, she claims that Russia has sought to establish and maintain a sphere of influence or buffer zone (e.g., Ukraine, Belarus, Lithuania) to protect itself from potential threats. In this vein, she contends that the 21st century is an “era of geostrategy”—a combination of political, cultural, security, economic, technological, and environmental factors governing a particular state’s relations with the outside world. Although she doesn’t say so directly, Zeleneva alludes to Russia having a legitimate justification for its action in Former Soviet Union (FSU) states such as Ukraine and Georgia. Furthermore, in the chapter focused on the origins of the modern international system, Irina Novikova and Andrei Bodrov outline, inter alia, the rise of the post-World War Two (WW2) order and the spheres of influence agreed to at the Yalta and Potsdam conferences in 1945. Is this a hint at the Russian Federation’s potential interest in shaking up the European order to reestablish such spheres? They also discuss the USSR’s collapse and, not surprisingly, attribute it solely to internal Soviet problems—including a dependence on commodity-driven economic growth and the volatility that brings—rather than to any role that the U.S. or others may have played. While Gorbachev’s reforms—perestroika and glasnost—as well as the structure of the Soviet economy certainly played a critical role in fostering the USSR’s demise, what about the impact of the arms race (e.g., U.S.’ Strategic Defense Initiative—SDI) or other Western-driven factors? While the impact of SDI on the Soviet collapse is controversial, some analysis of it’s potential or that of other Western policies would have brought this chapter greater balance.

In the chapter on soft power and public diplomacy (PD), Natalia Tsvetkova provides a solid overview of PD, how it’s defined, the difference between soft and smart power, the various theories (neoliberalism, realism, constructivism) used to describe it, and the contrasting understandings of soft power and PD between the West and Russia. She correctly points out that the Cold War was the “golden period” of PD but asks a question, echoing official Russian Federation sentiments as to why U.S. soft power and PD efforts have risen after the Cold War, and especially in FSU states, unless the purpose was to foment regime change via “color revolutions”? She then provides an interesting case study of U.S. foreign assistance to Ukraine just prior to the 2004 Orange Revolution which, in her view, enabled the U.S. to build a cadre of pro-Western politicians and NGOs espousing pro-Western values (e.g., democracy, human rights, rule of law) who collaborated to foment the revolution. At the same time, however, she makes no mention of Ukraine’s 2014 Revolution of Dignity for which Russia often blames the West. Regarding the 2004 Orange Revolution, Tsvetkova unfortunately omits any reference to the role that Russia played in supporting the conditions under which Ukrainians revolted and she completely ignores Russia’s hybrid warfare in Ukraine since 2014. Nevertheless, she rightly recognizes the important part that the internet and social media play in influencing and shaping public opinion, especially with regard to the anti-U.S. bias of global Russian-backed media outlets such as “RT.” She also acknowledges that Russia’s PD approach has been too short-term focused and ineffective as a tool of “attraction.”

Yury Akimov’s chapter on the origins of modern Russia examines the development of the Russian state and economy since the end of the USSR. He provides a solid review of how far Russia has come since that time. As do many others, he argues that the initial economic and social problems associated with Russia’s transition to capitalism, a free market, and democracy were due to a severe austerity program known as “shock therapy.” This program, as he describes, failed to deliver expected results and instead led to hyper-inflation, declining living standards, and rising poverty. Over time, however, he illustrates how the political and economic situation eventually stabilized under Putin, especially after Putin’s efforts to consolidate power and ride the wave of high commodity prices which spurred significant growth.

A chapter on Russia’s national security by Andrey Pavlov reviews the Russian Federation’s 2015 National Security Strategy (NSS), 2014 Military Doctrine, and 2012 Concept on Societal Security. Unfortunately, reference to the country’s 2016 Foreign Policy Concept—a key document that expands upon the NSS and Military Doctrine—is omitted. Pavlov points out, as highlighted in these strategies and doctrine, that Russia perceives its top threats as NATO expansion towards its borders and the alliance’s increased global role, U.S.-backed “color revolutions,” and the U.S.’ Ballistic Missile Defense (BMD) system, among a variety of others. Does Pavlov agree with Russia’s threat assessment? Unfortunately, he doesn’t say so one way or another. Instead, he mostly summarizes the threats identified in the documents. He also makes reference to Russia’s military reform and modernization process underway since the end of the USSR and especially after Russia’s 2008 war with Georgia. Based upon these documents, he describes Russia’s desire to have all states strictly adhere to international law and UN conventions, and to increase its role in regional security organizations such as the Shanghai Cooperation Organization (SCO) and Collective Security Treaty Organization (CSTO).

Another key chapter, this one on U.S.-Russia relations by Ivan Tsvetkov, contends that Russia has wrongly been ignored as a key player in global affairs and that it has the capacity to do more, productively, if given the chance. Tsvetkov traces the history of U.S.-Russia relations including their ups and downs over time, shows where cooperation is possible (e.g. Iran nuclear deal, counter-terrorism) and where it hasn’t been (e.g., Russian perception of U.S.-backed color revolutions as a form of regime change). Despite Trump’s overtures to Russia on the campaign trail and since taking office, and although this chapter was written prior to Trump’s election as the U.S. President Tsvetkov believes that bilateral relations between the two countries are regrettably “deadlocked” given continued Russian concerns over NATO and Western support of FSU states (e.g., Georgia, Ukraine). Only time will tell if improved cooperation is possible.

Overall, the book provides a solid analysis of Russian perspectives on a range of theoretical, methodological, and practical issues within the field of IR. The volume is highly relevant given the present state of play with regard to questions about Russia’s role in regional and global affairs. The book also generally provides a fair analysis of Putin’s efforts to expand his power as described in the concepts of the “power vertical” and “sovereign democracy.” Similarly, the chapter on soft power, as mentioned earlier, admits to the strong anti-American sentiment espoused by RT and other Russian-supported media outlets. Lastly, the “topics for discussion” and “further reading” (including both Western and Russian sources) provided at the end of each chapter are highly useful, especially for students. Nevertheless, the book could have been improved by including an overall summary chapter at the beginning of the book and then brief summary chapters prior to each of the three main sections. The Foreword and Introduction combined are only three pages in length. Furthermore, although discussions of the ongoing Ukraine conflict are minimal—the authors generally ignore Russia’s role in supporting separatists in Eastern Ukraine or in annexing Crimea—the reference to the Ukraine conflict as a “civil war” at the outset reveals an inherent bias of the authors who seem to echo official Kremlin sentiments. A serious discussion of Russian actions in Ukraine (as well as Syria) could have made the sections related to Russian foreign policy and security strategy more current and balanced. Also, the book would have been more well-rounded if chapters by Western scholars were added in order to juxtapose the Russian scholars’ pieces. The authors indeed acknowledged at the beginning of the book that the purpose is to have the reader “understand Russia’s stance.”

In closing, Russia and the World: Understanding International Relations, is a timely addition to the growing literature on Russia’s role in IR. While the authors offer solid analyses of traditional and contemporary IR theories and methodologies, and offer Russian perspectives on key policy debates, inherent biases toward official Russian stances render the collection somewhat out of balance

The book is available here at Rowman & Littlefield.

Inset Photo: “Cover photo of Russia and the World” – Rowman and Littlefield, 2017