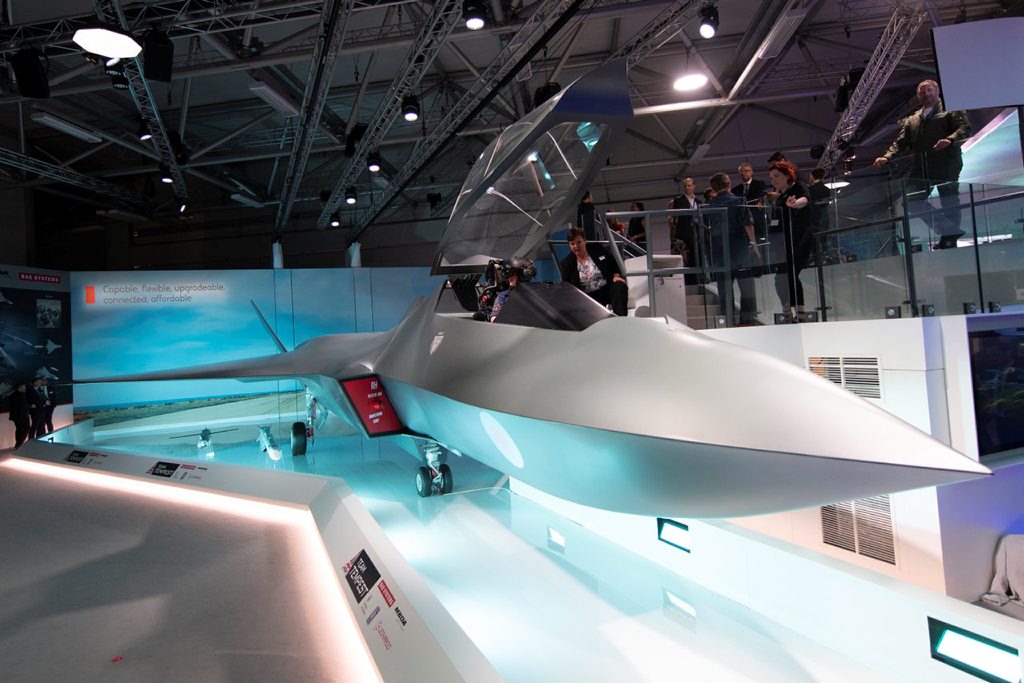 The UK has unveiled a concept for a new fighter plane at the Farnborough Air Show. It will be called the “Tempest” and is designed to replace the Eurofighter Typhoon currently in use by the RAF. The British government will be spending £2 billion on development between now and 2025, with Sweden mentioned as a possible partner for the development process.

The head of Dassault has joined a chorus of other defence industry voices in urging the UK and the EU to quickly arrive at a new agreement as soon as possible. Companies like Airbus have warned that there could be difficulties with production if there is no consensus on issues such as the UK’s membership of the European Aviation Safety Agency.

A new space port is planned to be operational in Scotland by 2023. Air Vice-Marshall Rochelle has said it could be of use for surveillance, reconnaissance and intelligence gathering, especially alongside other members of the Five Eyes intelligence-sharing nations.

Boeing is looking to partner with Airbus over a €4 billion heavy-lift helicopter deal with Germany, competing with Lockheed Martin to do so. The aim would be to win a contract for deliveries to start in 2023.

Russian social media has been active with videos of new nuclear-capable delivery systems in the aftermath of President Vladimir Putin’s meeting with President Donald Trump. Other equipment which has been displayed includes the new submarine drone “Poseidon” and a laser system called “Peresvet.”

The Spanish S-80 submarine has been plagued by issues, the latest of which has been the discovery that it is unable to fit into its intended base. The Defence Minister Margarita Robles has said there have been “deficiencies in the project,” but that it is still “absolutely viable” as a project.

The presidents of the United States and Russia have held a private meeting in Helsinki. Although it is not known what was discussed, matters of defence and mutual security are assumed to have arisen. Shortly afterwards, a Russian statement said the Kremlin would be willing “to intensify contacts with its American colleagues through the General Staff and other available channels of communication.”

A US Marine general has said that the US military is unfit to conduct a conflict against another major power. “If you acknowledge that we are, in fact, in a great power competition and you take a look at our competitors, our competitors are well-organized and we are not,” said Maj. Gen. John Jansen at a recent industry event.

The Canadian military has just received delivery of a new Israeli-built radar system for $200 million which is unable to link in to the NATO air defence network. A Canadian spokeswoman said their military could “develop a solution or work-around to any possible system integration challenges” should the need arise. The Czech military has now paused its own procurement of the same system because of its incompatibility with the NATO system.

It has been denied that several Nigerian Army vehicles and soldiers have gone missing after a recent ambush by Boko Haram. The Nigerian military has claimed that the attack has been “blown out of proportion by the media” and that although there was an attack by the militants, none of the Nigerian troops are missing.

The Russian ambassador to Iran has spoken about his country’s concerns over an escalation in violence between Israel and Iran. “We are naturally concerned about the possibility of military confrontation between the Iranian and Israeli forces in Syria,” said ambassador Levan Dzhagaryan.

As part of a modernisation programme, Iran is set to domestically produce up to 800 tanks. Iran is also looking at working with neighbour Pakistan to commence joint production on military equipment. The new tank would be of the “Karrar” class, which is thought to possibly be an Iranian version of the Russian T-90.

Syrian government forces have launched an offensive against the town of Nawa, the last area of urban resistance in the country’s southwest. Air raids have crippled the rebel-held area’s only hospital, which have only intensified in the wake of failed talks to conduct a surrender agreement.

The People’s Liberation Army Navy (PLAN) of China may be deploying a new domestically developed tank, the ZTQ-15. It seems to be designed to operate in difficult terrain, including mountainous country as well as across rice paddies.

China has been conducting military manoeuvres in an area close to the disputed Diaoyutai Islands which are covered by a treaty between the US and Japan. Live-fire exercises have been conducted in an area roughly the same size as Taiwan, at a time when many of China’s maritime neighbours have been dissatisfied with their larger neighbour’s actions.

Extensive talks have been held between India and the United States over joint military development projects. One of the main focuses for India is domestic production, but progress has reportedly been made in terms of surveillance technology as well as with aircraft carrier technology cooperation.

The Taliban claims that indirect peace talks between them and the US have begun.

Yesterday, HMCS Ville de Québec departed with an #RCAF Cyclone helicopter in support of #OpREASSURANCE. Here’s a video of the helicopter and crew conducting some recent training in the lead-up to their departure. #RCAFProud pic.twitter.com/ShJxOIfj9Z