Weekly Recap: Why aren’t we talking about Ukraine – Part Two 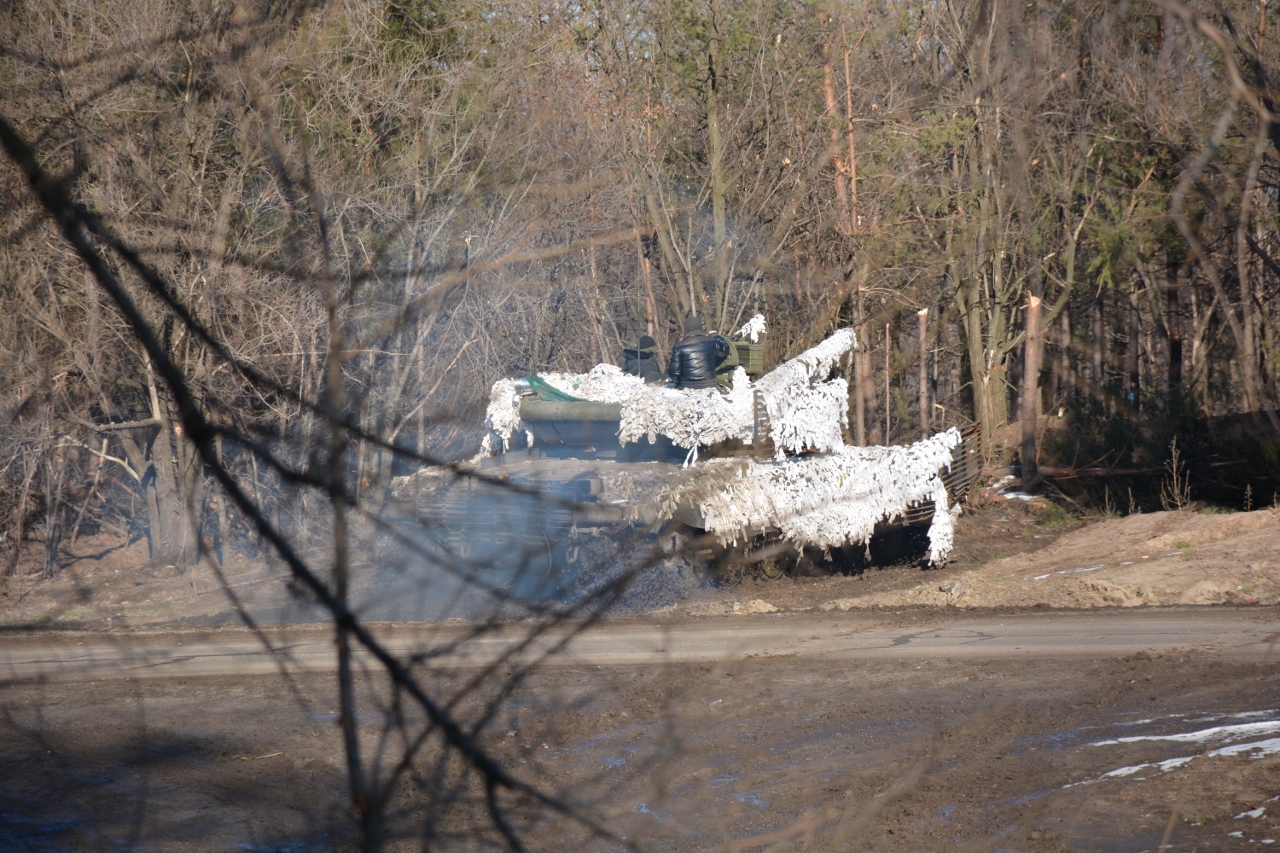 The Canadian Prime Minister is, generally speaking, a rather silly character on the international stage and his position on Ukraine is without a doubt both simplistic and naïve. It has obviously been cooked up for domestic consumption. That said, even a broke clock is right twice a day. In this case only partially right but none the less the Canadian PM is correct to be raising the alarm about Ukraine. His motivations might be selfish, he may have hit upon the issue almost by accident while trying to find ways to help himself, and his conception of events may be off the mark considerably but Prime Minister Harper is right in stressing the importance of events in Ukraine to the global community, even if he is unsure as to just why that might be.

One reason that this conflict has been relegated to the back pages is the unwillingness of the international community to step up and face the cold hard fact that they are in a stand off against a massive, if antiquated, military power intent on drastically redrawing the lines of the international order. This awareness of Russian intent must first be acknowledged and come to terms with if the West wishes to even understand and discuss the situation never mind address it.

Some have been willing to downplay Putin’s ambitions and suggest he is unlikely to push harder than he already has. This is rooted in a belief that NATO’s rather weak response coupled with sanctions is doing its job. However John Herbst, former US ambassador to Ukraine, is one of a growing number who suggests otherwise. Instead Herbst, now director of the Atlantic Council’s Eurasia Center, has been critical of NATO’s response. He has begun raising alarms that a lack of a strong coherent response, coupled with Russia’s increasing domestic issues may encourage Putin to step even further.

Another motivator, which might push Putin further, is the complexity inherent in conflicts of this kind, approached as they have been in a dangerous and unstable way by the Kremlin. Dangerous and unstable because this covert war fighting on the sly requires working with loosely aligned groups. This means dancing with the devil and the devil gets to lead. Things could rapidly move outside of Putin’s control and draw him into position previously unforeseen and which may demand rapid and even radical responses.

Dancing with the Devil

On both sides of the conflict relationships with extra-governmental forces on the ground are problematic. Both sides have rather distasteful elements, which have begun to breed extremists. Increasingly they are adopting ever more appalling approaches to waging an ever more desperate conflict that has, according to the UN, already claimed over 6,000 lives.

On the Russo-Rebel side, rebels within the Donbass have begun a program of youth indoctrination through para-military youth groups that, it must be said, share startling similarities with the Hitlerjugend. This is however only one of many issues that range across both sides of the conflict. On the Ukrainian side, their desperation to recruit fighters has led them to incorporate the notorious fascist Azov Regiment under the directorate of the Ukrainian National Guard. The Azov Regiment, if their neo-Nazi ideology was not distasteful enough, have sickeningly posted videos of their members proudly torturing, crucifying and burning alive a captured uniformed enemy combatant.

Both sides are guilty of some pretty disgusting acts that leave the conflict all that more distasteful and difficult for Western powers to address. The West has largely tried to avoid or ignore these issues. Most of what we know about them seems to come from outside the halls of mainstream media. The attempt to skirt these inconvenient truths has created holes in an already difficult to navigate, overly simplified “Ukraine good – Russia bad” narrative. Through their avoidance to address these challenges in real terms outside of the increasingly tired “Ukraine good – Russia bad” narrative the issue has fallen to the back pages. This is the detriment of the entire world, most especially the Ukrainians on both sides of the conflict who are suffering a massive humanitarian crisis. This crisis has been relegated to the sidelines of international diplomacy as the Ukrainians themselves become, yet again in their long and difficult history, cogs in great power politics – or perhaps in this case the lack of great power politics.

The damage being caused has been compounded by the effect the position of leaderships around the globe have taken on the issue and the implications this has held on international media. Most of the discussion being had in the media today is incredibly simplistic and usually not just one-sided but partisan to boot.

Even the very best have been drawn into this issue along partisan lines. On the left, anti-interventionists and doves alike have correctly raised concerns over the issue of supporting the Ukrainian Government in the face of evidence that government sponsored agents have committed war crimes. In doing so they have correctly served to ask the public to question and think more deeply about foreign policy concerning Ukraine.

Many journalists and even defence insiders have pointed to the groups that have risen inside the power vacuums created by the West’s interventions in places like Libya and Syria as a warning. It is a reminder we are now fighting forces of our own creation and that the West need proceed with caution. However assessments that draw this parallel are open ended and more concerned with criticising political targets.

In the case of Canada’s Prime Minister Harper, who is an easy target for ridicule within Canadian political discourse by this point especially concerning foreign policy, has been particularly challenged in articulating a clear message to Canadians concerning Ukraine that is not seen as hawkish rhetoric.

Furthermore these are incorrect parallels. What is occurring is not a civil war or the breakdown of a country’s authoritarian government. Ukraine is an entirely different affair. It started similarly enough as the Ukrainian people attempted to remove a corrupt government deeply indentured to Moscow from power has now degraded to a state-to-state conflict disguised as otherwise It is a foreign invasion by the use of subversive means and the co-opting of Quislings. The lack of attention this receives as well as the lack of alternative presented by critiques of current policy is deeply unsettling.

There is a failure within the discourse aimed, quite rightly, at criticising issues within the West’s response to Ukraine, to acknowledge that regardless of the troubling issues within Ukrainian militias the humanitarian crises is going nowhere without action. Likewise Putin is still an aggressor that has no intention of going away willingly. There seems to be a lack of awareness that these groups, sponsored as they may be by the Ukrainian Government, and as horrendous as their acts most certainly are, only exist in a situation created by Putin. Russia’s destabilization efforts, regardless of the intentions that lay behind them, are a root cause if not the root cause of this.

Speaking on the issue of Russian motivations we should be paying keen attention to Putin’s refusal to directly incorporate the Donbass. There are those that argue it is a sign that Putin is wavering but this is simply wrong. Putin does not wish to inherit Ukraine’s rust belt and its problems and in doing so have this conflict disappear. Putin wants a frozen conflict as a means to further advance his agenda regarding the West. Putin is willingly creating a humanitarian crisis, destabilizing a country and allowing thousands to die to advance a political agenda on an international stage. This is nothing short of disgusting. Putin’s response to this charge would likely be to argue the Americans do likewise and that the criticism is hypocritical. He may be correct but it does not serve as justification.

Some critics of Western involvement in Ukraine have gone so far as to imply we have no reason to be upset in the West suggesting things are better off. Some point out “Even a poll conducted by the Canadian government revealed that an overwhelming majority of Crimean residents are still happy with their chosen change of nationality.” To be fair there have been several surveys (see here and here) which covey these results.

However, one must also consider the motivators behind why this might be. No one can be certain of what this sentiment is rooted in. Is it Russian money flowing into the region and the insulation Russian occupation has provided from growing instability further north? Or perhaps it might be fear of the FSB, this was a ‘ballot by bayonet’ after-all. Perhaps it is as simple as nationalist idolatry. Regardless of the motivator or how accurate these surveys may very well be, citing them misses the underlying point. Russian methodology concerning the annexation of the Crimea is still a totally unacceptable and dangerous precedent to set in international affairs. The ends do not justify the means regardless of how happy Crimeans find themselves under Russian rule.

This is part of a special three part series. Tomorrow, part three will be published. If you missed yesterday’s, you can find it here.