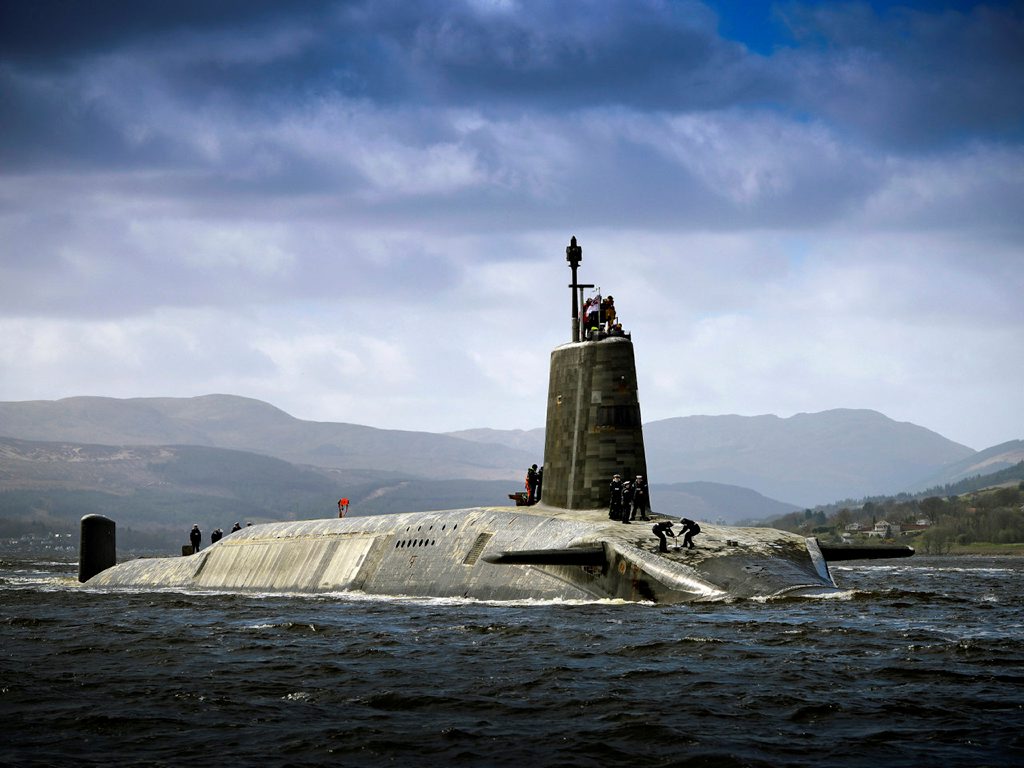 Defence Secretary Gavin Williamson has announced a £2.5 billion increase in funding for the UK submarine programmes, split between the Astute class and Dreadnought class projects. He said, “This multi-billion-pound investment in our nuclear submarines shows our unwavering commitment to keeping the UK safe… whilst our nuclear deterrent is the ultimate defence against the most extreme dangers we could possibly face.”

The UK plans to create its own satellite navigation system should it be unable to participate in the EU’s Galileo project after Brexit. Space security expert Bleddyn Bowen says “There’s nothing preventing Britain now from saying… we want to negotiate our way back into PRS.”

Members of the European Parliament have approved a resolution calling on closer working on the issue of cybersecurity in light of recent cyber-attacks. EU member states have been urged to improve their cyber capabilities not just with each other, but other partners including NATO.

Germany has pledged to boost its defence spending to 1.5 percent of its GDP by 2024, according to its Defence Minister Ursula von der Leyen, although this is still short of the NATO target of 2 percent. In recent months the German armed forces have been criticised for their lack of functioning operational resources.

President Vladimir Putin has stated that Russian missile regiments will receive new Yars ICBMs this year, in addition to new missile-carrying bombers which will be available later this year. There was also mention of the S-500 surface to air missile which should soon be ready for manufacturing.

Spain has increased its annual defence exports for the second year in a row, with most of its sales coming from aircraft. Major purchasers include Germany, Turkey, and Saudi Arabia, with an increase of ammunition sales nearly tripling to Saudi Arabia since its involvement in the war in Yemen in 2015.

The United States’ Navy’s most expensive warship has just become even more expensive, requiring an additional $120 million in order to “correct deficiencies identified during testing.” This will take the ship over the Congress-approved $12.9 billion budget cap set for the vessel.

A report on dealing with returning ISIS fighters to Canada has been revealed, highlighting the difficulty which is faced by the Canadian authorities in securing criminal charges against these individuals. It’s been established that so far, 16 Canadians had returned after serving (with assorted factions, not just ISIS) in Syria and Iraq, whilst another 21 Canadians had been killed in action.

South Africa has launched a Defence Industry Fund (DIF) designed to help facilitate changes identified as necessary in a 2015 defence review on the state of the South African National Defence Force.

Egyptian security forces have launched a large-scale operation in the Sinai, killing and arresting several militants. The militants have been active since 2013, and defeating them is one of the declared objectives of President Abdel al-Sisi since his election victory this year.

The EU has offered a new nuclear deal to Iran as a means of salvaging something positive after President Donald Trump’s withdrawal of America’s involvement. The foreign ministers of the UK, France, Germany and Iran have all agreed to a nine-point plan, with the Iranian minister saying, “I believe it’s a good start. We’re not there, we’re beginning the process.”

At least 58 Palestinians have been killed at the Israeli border with Gaza in a series of protests over the relocation of the US embassy from Tel Aviv to Jerusalem. Israeli sources reported that the militant group Hamas was behind inciting the violence.

After offering signs of reconciliation, North Korea has threatened to suspend any future talks after accusing the US and South Korea of provocative military exercises. Anthony Ruggiero, an academic at the Foundation for Defence Democracies said, “North Korea’s actions today are not surprising… cancel/suggest Pyongyang might cancel the meeting and then push for more concessions to have the meeting.”

The South Korean government has signed a memorandum of understanding with an American company to collaborate in providing upgrades to their fleet of Chinook helicopters. Additionally, the memorandum states, “The sides will also explore ways of expanding cooperation on overseas aircraft maintenance, repair and overhaul projects.”

China has confirmed that recent military drills have been intended to intimidate and threaten Taiwan after recent actions it has regarded as being too independence-oriented. Beijing cut off ties with Taipei in 2016 due to Taiwanese refusal to accept a the island nation being part of the Chinese state.

Picture of Nigerian soldier carrying an elderly hostage who was held by Boko Haram.

? ??Nigerian Soldier rescuing elderly held hostage by Boko Haram terrorists in Gobara, a village in the Gwoza Local Government Area of Borno State. They are real life heroes, they ignore the libellous tag of ‘terrorist collaborators’ and fight to keep terrorists at bay. ??? pic.twitter.com/QKTovRhhGk

NATO marked 10 years of conducting air operations out of Iceland.