Book Watch: The Psychology Of Radicalization And Terrorism

The Psychology Of Radicalization And Terrorism 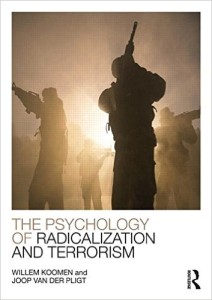 A never-ending debate about how to respond terrorism is waged within the media, bombarding us daily. Very little attention is paid by this debate or its talking heads and self-proclaimed ‘experts’ about what the causes of terrorism are or how not to simply respond but prevent radicalization and terrorism from occurring. For all their ‘expertise’ these talking heads are left bewildered at the simple question of how individuals, sometimes (indeed often) their own citizens, otherwise seemingly normal or even well educated can become radicalized and commit such unspeakable acts of violence. Their desperate search to explain this phenomenon often leads to rather superficial, ignorant, haphazard explanations, pointing blame to the violent nature of Islam or some such reasoning.

All these answers really do is demonstrate how little these individuals actually understand the subject they claim knowledge of. This is only amplified by the talking heads, the media mouthpieces, and even worse the over opinionated braggarts. Overtly self-assured, armed with an unquestioning self assurance and an incapability of even the most basic critical self examination, supremely confident of their own view these individuals loudly weigh in on any and every issue with wanton disregard for their lack of even basic knowledge on the subject. Anyone who thinks they can simply glance at events as reported in the evening news and assert they understand all the complexity, nuance, and subtlety of the situation, and further assert they have the answer are dubious individuals who deserve our weary skepticism.

The real problem goes beyond self-assurance and egotism. It goes to their utter disdain for any who disagree or argue a need to look deeper. They attack anyone who dares challenge their view or suggest a deep understanding that would even hint at further consideration. They hurl words like academic, appeaser, libtard, and accuse these individuals as being soft or traitorous– it’s all very exhausting, not to mention totally counter productive. The reality is if we have any hope of challenging radicalization and terrorism we need to get to the heart of the issues that underpin these phenomenon. We have to understand the causes. This means looking deeply at the social factors that create the environment that nourishes radicalization.

Willem Koomen and the late Joop Ven Der Plight’s recent release The Psychology of Radicalization and Terrorism published by Routledge, attempts just that and with gusto. Koomen and Ven Der Plight recognize several unique sources, or manifestations or radicalization and terrorism. Left wing revolutionary, right wing, nationalist/ separatist, religious, and single-issue groups are all examined and used to highlight themes inherent in the phenomenon at hand.

Right out of the gate the authors point to the elephant in the room … definition. The term terrorism is fluid and inconsistent with over 100 actively in use within the mainstream literature on the subject. The old adage ‘one man’s terrorist is another freedom fighter’ comes to mind. The authors start by framing their discussion within the Global Terrorism Database’s (GTD) definition of terrorism, which they argue to be currently the most comprehensive open-source database, which includes both domestic and international terrorist attacks. This definition of terrorism is “the threatened or actual use of illegal force and violence to attain a political, economic, religious or social goal through fear, coercion or intimidation.”

Throughout their examination the authors provide a great deal of supporting data and introduce countless valuable and interesting studies which serve to highlight their arguments. The value of this material is further added to by providing a bibliography at the end of each chapter making it ideal for research and reference. Although it can be a heavy read, for any serious mind focused on the subject it is a critical addition to the bookshelf. This is a must have.

The author’s remind us that even the most seemingly benign and disconnected variables have real and serious influence upon how we view people and events. For example, being in a weakened position, such as being poor, causes people to view their environment as hostile and they then react by behaving accordingly. The serves as a reminder that applying negative stereotypes to minorities may make us feel better and more secure about ourselves when we feel insecure or threatened but as relations become strained between groups the desire to understand the other is usually suppressed in favour of promoting positive images of ones own group and negative of the others. Ultimately this feeds a phenomenon wherein those who are subject of negative stereotypes are more likely to behave in negative ways. Being treated poorly and subjected to injustice makes one more sensitive and reactive to events that can possibly be perceived as injustices and will also draw a connection to discrimination.

The message of the author’s is that we must be more conscious of our positions within society and how this can frame our views and promote certain prejudice. The message here is that we need a more self aware and inward facing critical eye. These prejudice are not simply ignorant, as the author’s demonstrate they actually feed the very cycle of radicalization and terrorism that we are reeling against.

The authors urge us to become more conscious of the indirect cultural elements that foster radicalism such as honour, hierarchy, and uncertainty avoidance. The author’s highlight that studies have shown that societies with high on fatalism and low on gender egalitarianism, for example, have higher rates of terrorism. Furthermore, strong obedience to hierarchy also promotes unquestioned leaders and opens citizens up to becoming terrorists. They also point to marginalized political organizations and shows us many of the early warning signs to watch out for, like an idealized past for example.

Just as importantly the authors dispel myths, at a time when jihad and Islam capture such intense attention they remind us that religious groups are particularly effective at removing social anxiety and promoting a sense of belonging making them particularly potent vehicles for radicalization. However, although it serves to facilitate it, religion is rarely the cause, just the vehicle. The chapter on religion is very interesting, it ties together so many of the previous themes that religion almost looks to be the perfect storm. The author’s remind us, however, to exercise caution, arguing that most of these attacks stemmed from political conflict not religious and that religious terrorism is often geopolitical. To their minds this suggests that Islam and jihad only play a role in so much as they advocate the defeat of western powers, which are preventing the establishment of their own group’s predominance. This assertion is cause for much of established mainstream orthodoxy on the subject of radicalization and terrorism as it relates to Islam to be challenged, reevaluated, and perhaps even jettisoned.

Recognizing these cultural, political, economic factors as well as environmental catalysts such as state failures, which are a significant predictor of terrorism, can arm us in the fight against radicalization and terrorism. The author’s remind us that prosperity and standard of living serve to seriously mitigate extremist tendencies. With this in mind counter-terrorism (CT) operations aimed at ‘capture / kill’ are as likely to create martyrs as they are to succeed where as the less popular and less immediately satisfying strategy of humanitarian effort is likely to serve us better in the long run in many instances.

However, if there is one message in this book it is there are no universal truths and that everything in the realm is situation specific. Some CT suppression approaches like Peru can work where as others like Chechnya can fail depending on the view and support of the wider population as to the legitimacy of the action. Likewise public revulsion against violent acts of terrorist groups is not a guarantee and in certain environments it may garner wide support for various reasons. Furthermore although one major tool in fighting radicalization and terrorism appears to be breaking down the isolation and engagement in the case of forces like AQ and ISIS these solutions do not easily apply.

A common factor of the ideologies described in this book (right-wing, left-wing, Islamic) is that they all attribute all or at least the great majority of extant social and economic problems to the dominance of the prevailing power. Isolation features regularly in the literature of radicalization and terrorism. The author’s also remind us in the digital age isolation takes on a new meaning. The internet can contribute to a group’s isolation by providing a ‘second home’ : a safe environment populated by only like-minded people.

The authors remind us that context is key. Right-wing, Left-wing, Islamic radicalization although developing the same are in fact responding to very specific and unique perceived threat which is key to understanding their development and responding effectively.

To borrow from the last chapter of the book where the authors look to Marc Sageman, since 9/11 the research agenda surrounding issues of radicalization and terrorism has largely been dictated by non-experts with a clear political agenda. Funding and research often reflect policy makers’ narrow concerns based on lay assumptions and misunderstandings. Research questions such as ‘why do they hate us?’ led to a wide variety of research efforts focusing on the origin of this hatred in the religious ideology of terrorist. The underlying assumption has seemed to be that everything could be blamed on Islam; indoctrination and/or brainwashing turned naïve youngsters into religious fanatics and remorseless killers. Net the focus was on recruitment but was still based on the assumption that cunning sophisticated leaders lured innocent naïve people into terrorist movements. As we have come to see this is simply not the case; we have been asking the wrong questions.

Although a heavy read The Psychology Of Radicalization And Terrorism should be on the bookshelf of anyone who weighs into domestic security or defence and foreign policy concerning terrorism. Ultimately, if you don’t understand the causes your responses and policies are almost guaranteed to only worsen the situation. Be being unaware of the phenomenon discussed in this book one can not identify the problems arising in one’s own approach and view and will therefore almost certainly play into a scenario that will serve to only worsen the problem be they real or perceived.

This book can be found here at Routledge

Inset Photo / “The Psychology Of Radicalization And Terrorism” – Routledge, 2016