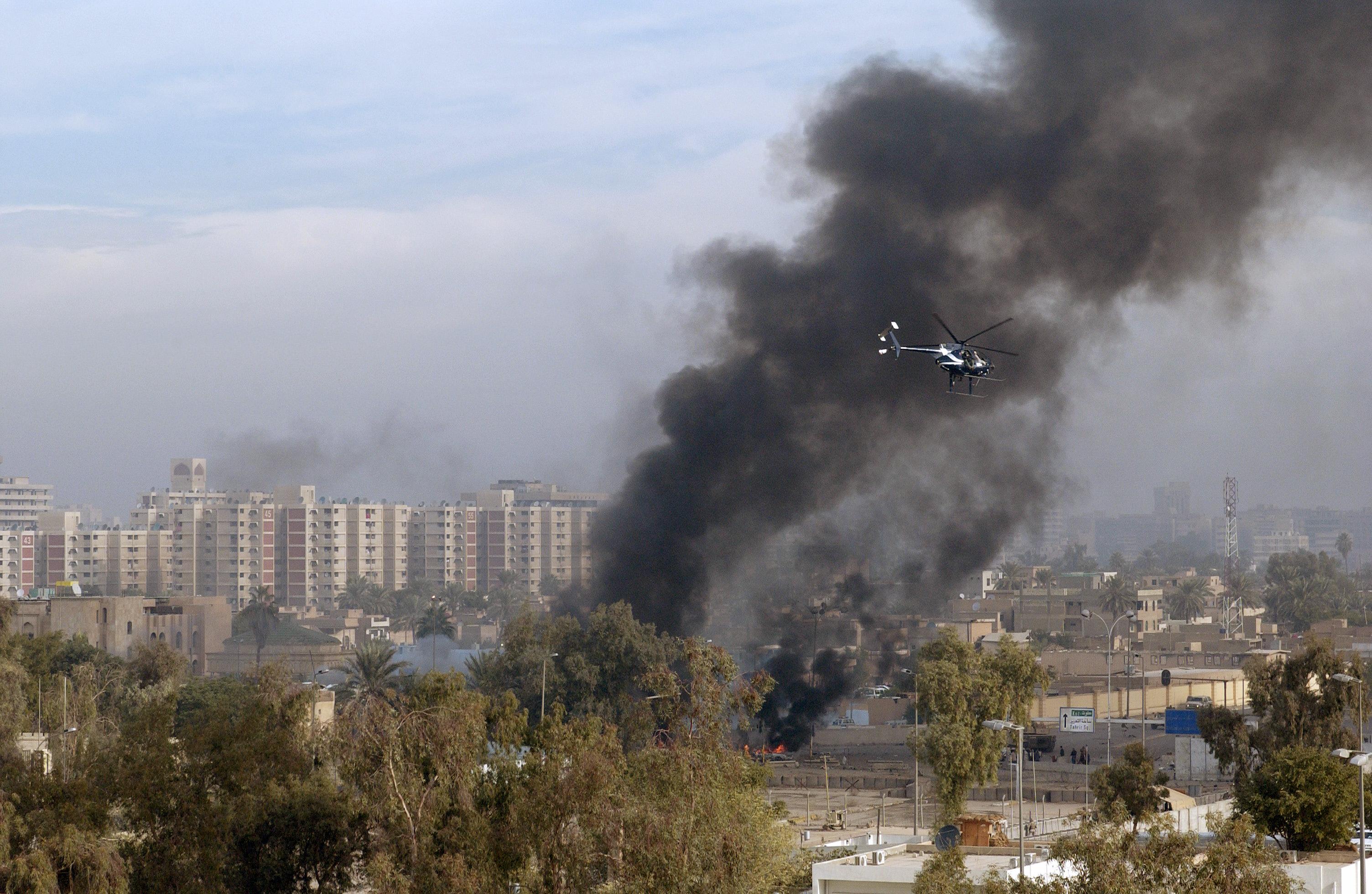 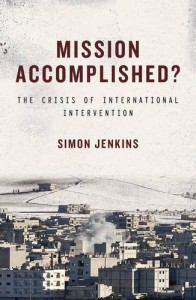 The collapse of the Soviet Union followed shortly thereafter by the slow and ugly decay of Yugoslavia brought about a change in Western approaches to international crisis. The interventionism that had died in Saigon in the closing days of the US war in Vietnam was born anew.

Such is the underlying view of Simon Jenkins’ new book Mission Accomplished? The Crisis of International Intervention. Jenkins “has been one of Britain’s leading commentators on global events over the course of the past two decades” and is well known journalist who writes for the Guardian and broadcasts for the BBC. He has served as the political editor of the Economist and has both written and edited The Times.

“The end of the cold war with the Soviet Union left Western governments seeking a new sense of purpose on the world stage. They found it in the profession of policeman.” The mantle of regime change was taken up by the West. It was for the greater good and the West looked to Bosnia with pride as an example of the successfulness of this ‘new’ doctrine. This view would come to shape the future course of Western foreign policy and with it shape the course of world events for the next two decades as numerous questionable military campaigns were launched, usually against small Muslim states to free the world of tyranny.

Gone were the policies of the 1970s and 80s seen in Lebanon, Libya, Burma, Iran and North Korea that “cemented targeted regimes in power.” “With the end of the cold war, opinion began to shift. While the Soviet sphere of influence lost its potency, the West’s triumph heralded new opportunities and obligations.”

The rebirth of interventionism in the post cold war word took on a new form with a new generation un-phased by the thought of “unprovoked aggression against foreign states or in their armed bombing civilian populations.” “intervention [had] moved from that of charitable aid and exhortation to economic sanction and eventually military aggression”

“Over the following decade this view was gradually fashioned into a doctrine that governments had a ‘responsibility to protect’ their people from ‘genocide, war crimes, crimes against humanity and ethnic cleansing’” A new view took hold where military aggression against states that were deemed no longer legitimate or deserving of sovereignty due to domestic issues began to alter the international constructs of intervention. Success in Bosnia had altered course in the West the 21st century was becoming the “age of intervention.” “Aid graduated from charitable to economic and, finally, military, backed up by a vague and confused concept of international justice, shrouded in realpolitik.”

In his new book Jenkins has masterfully brought together a collection of his past writings that creates this intriguing narrative of post cold war events. It is equal parts critical analysis of Western policy entering the 21st century and self-examination. It is, at first, off-putting to see article excerpts bridges by short connecting paragraphs. However, Jenkins has obviously done considerable thinking about how to put it all together. There is something elegant about the intimacy of thought portrayed by the way Jenkins has strung these articles together. It ends up reading like a recollection. Although you may not agree with his proposed approach to these issues you certainly can’t fault his logic or criticisms. The end result is a narrative that is clipped and flows quickly, smoothly and with both deep insight and elegant simplicity.

The unique insights into the context of world events as seen from an individual who visited the focal points of this new doctrine and who served on the ‘frontlines’ of domestic policy discussions is invaluable. Jenkins is intimately familiar with the domestic pressures at play Britain and by extension the US. His look back could serve as a useful research companion for someone looking into one of these events or the overall cultural trend/ shift Jenkins attempts to grapple with. Certainly Jenkins writing gives insight into an opposition opinion of policy evolution during the period and often an adversary’s critical eye is sharpest and their views most illuminating. His work no doubt provides some intriguing insight into the thinking of the time. One almost immediately begins to question the foundations of Western weltanschauung.

Jenkins is not, however, without fault. His writing is openly one with an agenda and advocates a strong view of what is and what should never be. His position is one that holds the “liberal Imperialism” of modern interventionism in the same light Eisenhower’s military industrial complex as the new “enemy of peace.” His writing therefore at times holds a less than subtle anti-military streak that rejects the evolving nature of war and the impact it holds on conventional military rules of engagement and international law. Much of his anti-convention is spot on but it reads at times as self-righteous and naïve coming from someone knighted by the court of St James

A contradictory character emerges in reading Jenkins. One that argues “distant civil wars might be left to resolve themselves…Human tragedies might again be for charities to combat. Humanitarianism might be privatised” yet argues “the powerful have an obligation to intervene where they can relieve suffering.” He suggests however that if asked “what would you do…my answer is in substance identical to theirs: Nothing really. [They] are not in my country, are not my business and, most important, are not a problem within my power to solve.”

From his writing emerges a man at odds with himself oscillating between naïve idealism, realpolitik pragmatism, and bitter cynicism. His conception of war seems deeply governed by an arguably antiquated state-to-state paradigm that is limited, deeply misguided, and at times ignores history. This last point is a strange one. Reading Jenkins you find a writer who is obviously keenly aware of history and that it is a living breathing entity steering events today. The parallels Jenkins drawn from this extensive knowledge are thoughtful, incisive, and thought provoking. He is, however, convinced of the validity of only his view to how it applies to the present thus failing to remember the most significant lesson history can offer us – there is no one answer. In the shortcomings and failures of Western intervention he draws only one possible lesson, sees only one option. That is, not to do the job differently, better but to quit the job entirely. I wonder is Sir Jenkins might feel differently if he was the subject of one of his articles as opposed to its author?

It would seem Jenkins, rejecting idealism, has resigned himself to the nature of the world to being one of conflict, chaos, and suffering. It reads, at times, as someone who is beaten by events around him but still has the embers of an old fire smoldering away deep down inside occasionally reigniting for a brilliant moment but ultimately still a shadow of the former light. Jenkins seems to feel little responsibility as a citizen of Britain who enjoys the benefits provided by a nation whose position in the world was predicated upon centuries of imperial brutality, to strive to do what can be done to try and help the world climb out of the hole history has dug for them. ‘Now that we have what we need and can sit safely behind out gilded walls,’ Jenkins seems to imply, ‘let them sort it out for themselves, we have our own problems, best to stay out of it.’ Or as he suggests in his own words “to be responsible for a mistake does not imply the capacity to correct it” Jenkins is obviously unaware of the old military adage ‘you pick it up, you carry it.’

His commentary is nonetheless biting, his judgment swift and brutal. His observations cut to the marrow and his condemnation of Western selective adventurism masked as noble crusade is wilting. This is no doubt a book well worth reading regardless of agreement or disagreement with Jenkins’ views. At times his writing is deeply prophetic and is a shocking gut punch of a read and a reminder of the many, many mistakes made in our recent past that have brought us to the current quagmire we face